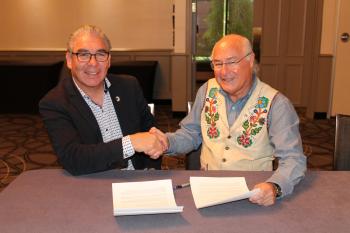 “What’s happening in the eastern Metis context is they read Powley, they see the term “Metis” as this empty vessel that they can project themselves into, but they’re ignoring all the evidentiary requirements of what that test requires.” —Jason Madden

The growing trend of people east of Ontario claiming to be Metis has led to a memorandum of understanding between the Assembly of Nova Scotia Mi’kmaq Chiefs and the Metis National Council.

The two organizations signed the MOU last month recognizing each other’s “Nationhood within their respective traditional and current territories.”

They also agreed to work together on the “issues of individuals misrepresenting themselves as Metis in Nova Scotia.”

“It’s a genealogical movement from descendants who are finding long ago Indigenous ancestors in the 1600s,” said Darryl Leroux, associate professor in the department of Sociology and Anthropology at Saint Mary's University in Halifax.

Some of those “finds” have led to court challenges with new organizations claiming Metis-status for land or rights. All 18 court cases—two in Nova Scotia and eight each in New Brunswick and Quebec—have been dismissed.

Leroux says he has studied 5,000 genealogical documents filed in those court cases, and 30 per cent of them claim ancestry to the same woman, who is actually French but is “magically changed” into an Indigenous woman.

He says 50 per cent to 75 per cent of French Canadians can claim at least one Indigenous ancestor and usually the same five to 10 women in the 1600s.

For the past 15 years, Leroux has been researching the role of French Canadians in racism. Three years ago, his focus shifted to the Indigenous aspect as more people were claiming to be Indigenous in music, culture and documentation.

Leroux stresses he’s not talking about people who were taken away from their homes because of residential schools or the 60s scoop or Indian Act criteria, but those who have now found that single descendant from the 1600s.

This sudden interest in Metis ancestry has come in the 15 years since the Powley decision was rendered by the Supreme Court of Canada.

“What’s happening in the eastern Metis context is they read Powley, they see the term Metis as this empty vessel that they can project themselves into, but they’re ignoring all the evidentiary requirements of what that test requires,” said Jason Madden, legal counsel for a number of Metis National Council provincial affiliates.

Powley sets out a 10-point test, which includes continuity between the historic practice and contemporary presence, and a distinctive culture.

He says all the successful court challenges for Metis rights have occurred in the west because that’s where the historic evidence is of a distinct people.

Leroux says two factors are pushing these new claims to Metis -hood. One is the desire to get the “unfair benefits that Indigenous people get” and some people have bought Metis cards in order to get these benefits. The other reason is to lay claim to land or territorial agreements.

“This is a political strategy… and they’re doing this to protect white people,” said Leroux, who himself has a long ago Indigenous grandmother.  However, he doesn’t claim to be Metis.

“It’s a colonialism redux. They’re attempting to say they’re Metis in order to disempower the actual Indigenous people of the land by splicing at the claim although they’re technically white people,” said Madden, who is Metis.

Madden blames the federal government, in part, for this continued rise of new Metis organizations in the east.

“You see a kind of government inertia of not calling these groups out for what they are… What really underlies this is a way to undermine Indigenous rights and that’s what’s driving some of the proliferation of this phenomena. That’s terrifying because to be used in such a perverse way is beyond repulsive,” he said.

“It’s having damage everywhere. It’s having damage for First Nations, because you see these (new) groups asserting in territories that they have no right or claim to. You see it damaging the Metis Nation because there’s a perception out there that these groups are Metis. They’re absolutely not.”

Madden is hopeful that framework agreements being signed between the federal government and the MNC and Metis governments will underscore who are legitimately part of the Metis Nation.