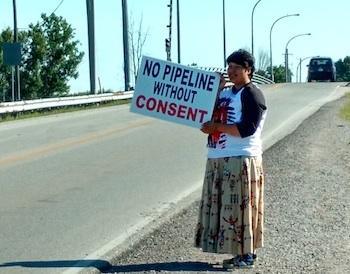 Protestors at Walpole Island First Nation along the St. Clair River in Ontario blocked a construction crew from their territory today, putting completion of a natural gas line in jeopardy.

Around 20 members of the community, also known as Bkejwanong Unceded Territory, along with non-Native allies, blocked the island’s only access route to stage an information picket Monday morning.

Workers preparing to continue installation of the pipeline were told by Union Gas the day’s work was cancelled after protestors gathered before 7 a.m. on the bridge connecting Walpole to the mainland.

The pipeline opponents believe drilling under the Snye River, which branches off the St. Clair, could endanger the river water.

All local traffic was allowed through, and protestors moved two vehicles blocking the bridge to the Island after police arrived.

Walpole Chief Dan Miskokomon called an emergency band council meeting, which was cut short when some of the picketers walked into the meeting room.  Later at a sacred fire started by the protestors, Miskokomon said the gas line is needed because the cost of heating homes by electricity is so great that island residents and businesses have racked up $4 million in arrears on their heating bills in recent years.

He said Union Gas may cancel the project if there are any more delays.

Company spokesperson John Bonin agreed the company cannot wait more than another week or two for chief and council to “provide safety and security so our employees can continue to operate.”

The technique of “horizontal drilling” that would be employed to cross under the river is a proven technology used all across North America, he told Windspeaker in an interview on Walpole Island.

Union Gas officials were surprised when two grandmothers from the island spurred a protest movement by grabbing on to company machinery and refusing to leave when work began Aug. 8, Bonin said.

However, some band members say they were not properly informed about the open house meetings, or about the construction.

Earlier this month, grandmother Marie Short said a notice about the start of the work arrived in island mailboxes the day after work was scheduled to start.   Other band members also stated the notice arrived late.

“We want a referendum.  We want the people to have a say,” grandmother Corinne Tooshkenig told her supporters while preparing to enter the Council Chamber Monday.

Tooshkenig began the protest when she and her friend Short went to the start of construction.  They wanted to offer tobacco and pray when the ground-breaking ceremony took place.

The workers started a machine behind them and Corinne “just grabbed on and prayed,” Short remembered.  “I turned around and she was crying.”

Corinne’s crying was “the cry of Mother Earth,” she told the council and audience.  Tooshkenig told her to go “get help. Get the grandmas.”

The protestors may get their chance for a community vote on the project, according to Chief Miskokomon.

In an interview, he said he will propose a community consultation take place within the Union Gas timeframe of two weeks.

The matter will be discussed at the band council meeting Tuesday night.

His offer was greeted cautiously by Theo Blackbird-John, a chief organizer of the protest movement at Walpole.

If only the pro-gas side gets to present their opinions by flyers or at a meeting, that would not be fair, Blackbird-John said.  He wants equal time and access for the opponents during any community consultation.

Protestors also oppose natural gas because it is obtained by “fracking,” a process which pumps high-pressure water mixed with chemicals underground to force the gas to the surface, they say.

Many problems are associated with fracking in the United States, such as neurological illness and birth defects in families near the fracking zones, Blackbird-John told council earlier in August.

He said Islanders are sensitive to using fracked gas because their island is on top of the third-largest shale gas deposit in North America, the same type of rock formation as those where fracking is taking place in the United States.

“The next thing you know they will be asking to frack here,” he warned council.

The gas and petroleum industry is a “dying sector,” and Walpole should be looking at renewable energy sources, he said.

At the protest site Monday, Blackbird-John said opponents are concerned that the wording in a band document says the federal government reserves rights to drill on the Walpole land, leaving the island vulnerable to companies who want to explore for gas there.

“I’m concerned people will get cut off.  We have 300 people not paying (their electricity bills) because they can’t afford it, and electricity is going up,” he said.    Adding the gas line will save a lot of expense heating the community’s school and will make it cheaper to dry grain at the Island’s Tahgahoning farming company.

The farming corporation will save over $200,000 in the first year of the gas line, according to a news release by the Council in July 2015.

The Walpole council approached Union Gas many years ago to get gas service to the island to help reduce energy costs for residents and community services, said Union Gas spokesperson Andrea Stass, but the high expense of the project was a hurdle.

Now the project has been started because the federal government has committed money, she said.

Construction will cost around $1.4 million and will take four to six months, so if the work is delayed for long, winter weather could be a problem, Stass admitted. 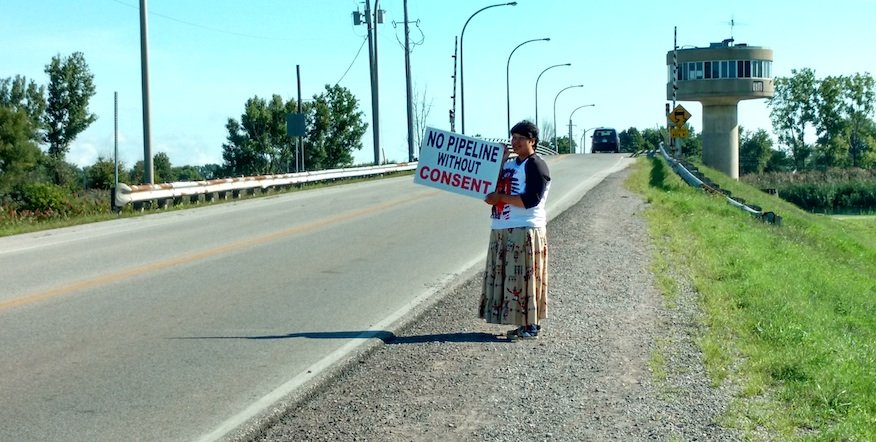 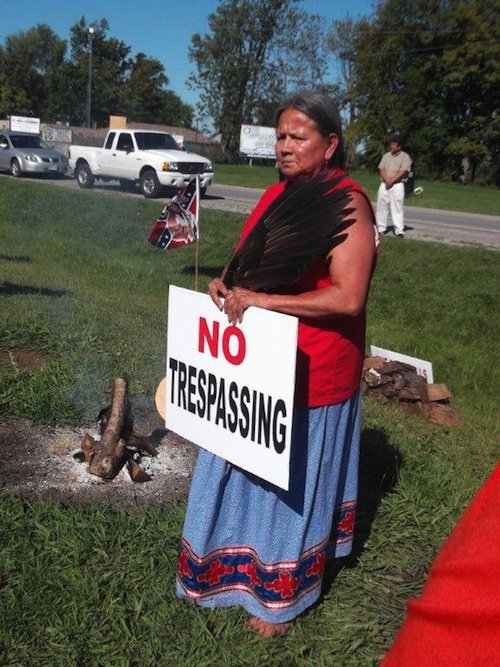 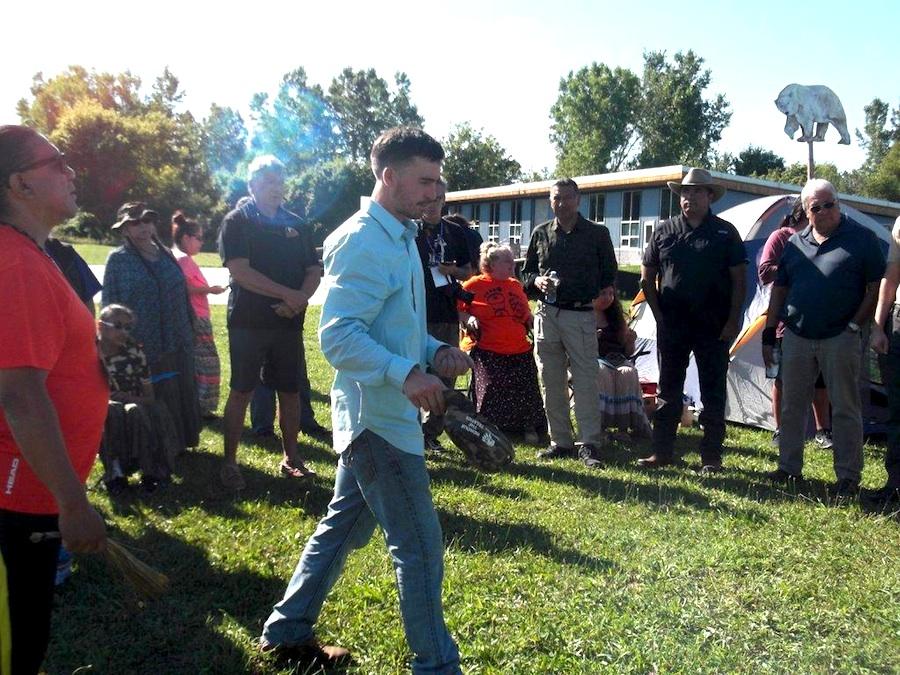 Protestor Theo Blackbird-John, who describes himself as a land defender and Idle No More supporter, approaches the sacred fire with herbs.