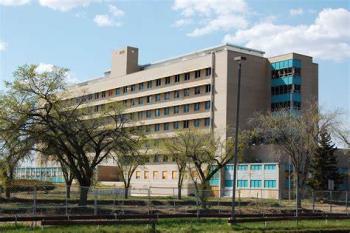 The Charles Camsell Indian Hospital operated from 1945 to 1979. It served primarily as a tuberculosis sanatorium, bringing Indigenous patients from western provinces, the western Arctic and the sub-Arctic.

“People who had gone to the Camsell, that’s where they were pinpointing over the years, the southeast corner of the property.” — Calvin Bruneau, chief of the Papaschase band in Edmonton
By Shari Narine
Local Journalism Initiative Reporter
Windspeaker.com

A five-inch bone fragment alleged to have been found on the grounds of the former Charles Camsell Indian Hospital in Edmonton is not from a human.

Architect Gene Dub, who is in the process of developing the site with residences, says he received verbal confirmation from the Edmonton Police Service (EPS) that the coroner had determined the bone to be from an animal. The bone was turned into Dub a couple months ago by someone who said it had been found it on the site. In turn, Dub contacted the EPS.

While that mystery has been solved, Dub is still waiting to hear back on the results from ground penetrating radar (GPR) that was conducted in June on the southeast portion of the Camsell site where no excavation work has taken place.

Dub commits to making the findings public, but says he will first be consulting with Calvin Bruneau, chief of the Papaschase band in Edmonton, and Dr. Kisha Supernant, director of the Institute of Prairie and Indigenous Archeology with the University of Alberta, who has overseen the methodology of the GPR work.

GPR findings are not definitive and indicate only anomalies in the ground that may be burials. Based on the probability of burials, the decision may be made to uncover some of the areas to determine exactly what has been found.

“We wouldn't want to decide without input from all the parties and those parties would be perhaps Indigenous peoples who were involved in the hospital, whose relatives were there,” said Dub, who is certain those who are interested will approach him.

Bruneau says there are stories that surround this one-acre parcel of land as burial grounds.

“People who had gone to the Camsell, that’s where they were pinpointing over the years, the southeast corner of the property,” he said.

The site in the Inglewood neighbourhood first housed a Jesuit College before being leased to the American military. Shortly after, the Royal Canadian Army Medical Corps took it over as a military hospital for veterans.

It became the Indian Hospital in 1945, operating in that capacity until 1979. It served primarily as a tuberculosis sanatorium, bringing Indigenous patients from western provinces, the western Arctic and the sub-Arctic.

There are many stories by former patients and relatives of mistreatment of Indigenous people at the hospital, some of which have been documented in books.

Bruneau says those who died in the hospital were buried at the Poundmaker residential school grounds (now Poundmaker Lodge), Winterburn (on Enoch Cree Nation), and St. Albert.

But it was the accounts of the burials on the grounds of the Camsell that Bruneau discussed with Dub before the COVID pandemic hit. However, says Bruneau, Dub “was skeptical.”

Dub admits it was the uncovering of 200 graves at the former Kamloops residential school, coupled with his earlier discussions with Bruneau, that pushed him to undertake the GPR.

“It is disturbing (that Dub waited until the Kamloops uncovering), but the thing is, it is good he’s taking that approach where, like he knows, there’s a very real possibility here that human remains are here and we better deal with it,” said Bruneau.

Dub is now considering going a step further, undertaking GPR along the east property line. It’s a two- to three-acre area where there are no longer buildings. The buildings that were there were only up for five to 10 years and didn’t have basements.

“We’re trying to imagine what areas there possibly could have been burials and that’s one that could have had burials before the buildings were built,” said Dub.

That decision won’t be made until the results come in from the first GPR study. Those results are expected later this week.

What will happen if burials are confirmed on the grounds is unclear.

“I don’t know if you want to take them out … especially the way things are (with the uncovering of other gravesites). It could re-open more wounds,” said Bruneau. “I think it would be better if it was sectioned off, fenced off and that area protected.”

Dub has already committed to a commemorative identification for those impacted by the Camsell.

He also said that if a burial ground were found in the southeast corner, he would not go ahead with his planned development.

The overall project involves the hospital being converted into housing; 20 townhouses built to the north of the hospital and a seniors project to the south. Land to the west has been zoned for an apartment, but there are no plans at this time to build that apartment.