FSIN holds true to Elders’ teaching: Share with those in need 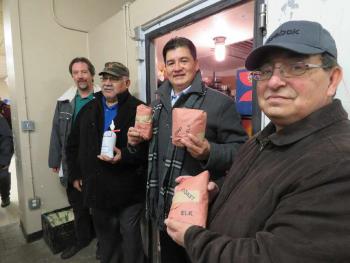 The Federation of Sovereign Indigenous Nations (FSIN) wants their First Nations community members to know they are cared for.

FSIN Chief Bobby Cameron kicked off this week delivering elk meat to a Food Bank in Prince Albert, and will be continuing the meat delivery all week long.

And it’s not only a way of showing people their leadership cares about them, but also of exercising treaty rights, in a way that benefits everyone, said Cameron.

“I’m an avid hunter and do it quite often when I have the time…. It was my late dad who gave me the gift to treaty hunt, and not only that but the gift to share what we kill with the people who need it… with the elderly, and with the families who need it,” he said.

“When I first got into leadership, I thought I wanted to do something positive to give back to our people and this is one of the items we at FSIN have committed to doing,” said Cameron.

Along with visiting the Food Bank in Prince Albert, Cameron will also be stopping at four other major city centers in Saskatchewan. And he’ll be hitting more than just Food Banks along the way.

Included on his list are also shelters and soup kitchens, and even a university—the Saskatchewan Indian Institute of Technology—because “students go hungry, too” he said.

“This year we’re going to the major centers where the majority of our membership live off-reserve. They live in the cities. They utilize the Food Banks and the homeless shelters... Some  go eat there every day,” said Cameron.

Cameron himself hunted some of the meat that is being donated. He and other First Nations community members organized a hunting party, to go out and harvest the animals, then butcher the animals themselves.

There’s now an assortment of meaty cuts—hamburger, roasts, meat for stews, and fry meats. And it was more than just elk that was harvested. There is also moose meat and even one wild boar—all for a total of nearly 2,000 pounds of fresh, natural meat, 200 of which went to Prince Albert this morning.

“Anytime and every time we implement and exercise our inherent and treaty rights, then they’re still alive and well. Hunting, fishing, trapping, and gathering… It’s survival off the land. And then it’s the sharing, too,” he said.

“And there’s protocol,” said Cameron. “We give thanks, we offer tobacco and prayers for the animals we harvest, so we can make sure we have a good harvest next time,” he said.

Cameron is, of course, not alone in this charitable act. He is receiving help from others, including all 74 First Nations communities and their leaders who are involved with the FSIN. And he’d also like to thank First Nations Elders for the good teachings.

“You know, our Elders taught us this is the way…. To share with your fellow brothers and sisters and your fellow relatives. To be kind and share,” he said.

Executive director of the Prince Albert Food Bank, Wes Clark, was happy to receive the donation to his facility. According to Clark, up to 90 per cent of the clients who use their service are Aboriginal.

The estimate 70 to 80 per cent status First Nations.

“Prince Albert is different than other communities… Because it’s the gateway to the north, the demographic is different. People come in out of the north, for school or looking for work and they may or may not have success here,” he said, giving insight into why his facility sees such a high number of Aboriginal people.

“We’re really thankful. It’s always great to see all walks of life getting involved… And the FSIN, and the Aboriginal voice is huge for us,” he added.