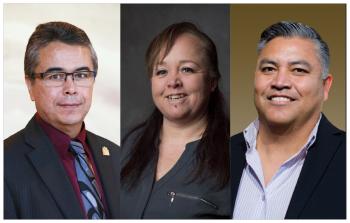 “Education jurisdiction is about providing a culturally relevant and excellent education to ensure our youth graduate with the knowledge, skills and credentials to thrive in any opportunity they choose for higher learning, employment and life choices.” —Tyrone McNeil, president of the First Nations Education Steering Committee
By Shari Narine
Local Journalism Initiative Reporter
Windspeaker.com

This September four First Nations in British Columbia will be operating their own schools after concluding self-government agreements with Canada for education of their children on their lands.

“We’ve been fighting for this for many, many, many years,” said Terry Teegee, regional chief for British Columbia Assembly of First Nations.

“When we talk about (the United Nations Declaration on the Rights of Indigenous Peoples), controlling our education is part of that. It’s part of sovereignty and self-determination and First Nations taking over our jurisdiction. This is one aspect, education.”

The signing of the education agreement, which took place on Seabird Island, also recognized the establishment of the First Nations Education Authority (FNEA) and marked the first time the FNEA has had a board of directors. It is comprised of two directors from each of the four First Nations.

“With the achievement of education jurisdiction and our new law-making authority, we are fundamentally changing the system and taking an important step to asserting our rights as Indigenous peoples," said FNEA president Stephanie Atleo.

The FNEA will assist the First Nations in developing capacity, including authority over teacher certification, school certification, graduation requirements, curriculum, and course approvals.

Thirteen First Nations began negotiating with the federal government for educational jurisdiction in BC in 2006. However, the First Nations’ have been working since the 1990s to advance their vision of education self-determination.

In 2006, Canada signed the Education Jurisdiction Framework Agreement with the province and the First Nations Education Steering Committee (FNESC).

"Education jurisdiction is about providing a culturally relevant and excellent education to ensure our youth graduate with the knowledge, skills and credentials to thrive in any opportunity they choose for higher learning, employment and life choices,” said Tyrone McNeil, FNESC president and member of Seabird Island First Nation.

Negotiations concluded in June and July 2021.

The other nine Nations still have to ratify their agreements.

Now the four First Nations are itemized in individual agreements under the First Nations Jurisdiction over Education in British Columbia Act.

The agreements were signed at the end of May and came into force July 1. They allow the First Nations to begin operating their schools in the upcoming school year starting September.

The federal government is providing $10.6 million over 10 years to the four First Nations both to support their new governance (at $4.6 million) and education services, as outlined in the Order Bringing Individual Agreements with First Nations into Effect.

New governance responsibilities include law and policy making, intergovernmental relations and coordination, consultation with members, and delegation of co-management authorities to the FNEA.

Teegee says he expects the process of negotiating self-government agreements in education will move forward faster in the future.

“It always goes slow when coming out of the gate. We would hope that this would make it easier,” he said.

The details of the agreement have yet to be disclosed, but it “will support the academic success of First Nations students in Quebec. It will ensure quality education based on community models, priorities and realities while promoting their cultures and languages,” according to the federal government’s media advisory.