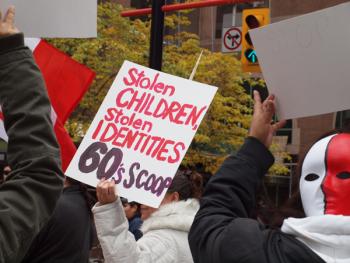 “…what really is important to most of the survivors of the Sixties Scoop… is the sense of reconnection to their identity, to their sense of self, and also to deal with the trauma that they experienced in the system.” — Senator Murray Sinclair
By Shari Narine
Local Journalism Initiative Reporter
Windspeaker.com

Almost two years after Canada provided a $50 million investment for the creation of the Sixties Scoop Healing Foundation, the inaugural 10-member board for the foundation has been established.

The tenth member of the board is the federal government’s sole appointee, Justice Harry Laforme.

Laforme, a member of the Mississaugas of New Credit First Nation, was also appointed by the federal government to the initial Truth and Reconciliation Commission. That version of the TRC folded due to internal issues and was replaced by Justice (now Senator) Murray Sinclair, Chief Wilton Littlechild and Dr. Marie Wilson. The Sinclair-led TRC worked to learn the truth of what happened to Indigenous peoples in Indian residential schools and reported back to Canada in 2015 with recommendations, 94 Calls to Action, based on their findings.

The Sixties Scoop Healing Foundation was established in an agreement-in-principle in 2017, which called for it to serve “all those affected” by the Sixties Scoop.

The Sixties Scoop refers to Indigenous children who were removed from their birth families and communities by child welfare systems. They were fostered out to, or adopted into, non-Indigenous families across Canada, into the United States and Europe.

The practise was conducted over several decades, but became widespread during the 1960s. The apprehensions were based on the premise that Indigenous parenting was inferior to White, middle-class parenting. The “scooping” of children was an extension of Canada’s paternalistic policies of assimilation, which included the Indian residential school system. The scoop resulted in devastating consequences to the children’s connections to their Indigenous identities.

An interim board of directors, in consultation with expert advisors, created a foundation that would first focus on and meet the needs of the individuals who were put into foster and adoptive care. It would then eventually support children and grandchildren of these families, according to the National Survivor Engagement Report, which was published this past August.

“The foundation was a paramount piece of the lawsuit,” said Sally Susan Mathias, co-chair of the interim foundation board of directors.

It was Mathias’s court action (under her adoptive name of Marcia Brown) in Brown v. Canada in 2010 that was certified as a class proceeding. In 2017, after nearly 10 years of litigation, an Ontario Superior Court justice determined the government had failed to protect the identity of the Indigenous children by placing them in foster and adoptive non-Indigenous homes.

A settlement was reached between Canada and the class action plaintiffs in December 2018. The foundation is established through that settlement.

Jefferey Wilson, lead counsel in Brown v. Canada, served as secretary-treasurer for the foundation’s interim board.

The interim board conducted 10 in-person nation-wide engagement sessions that were held with survivors from August 2019 to February 2020. More than 3,000 suggestions were gathered. They were pared down to inform the foundation and establish seven recommendations, three of which centred on the board: board composition and core qualities; board diversity and skills; and board recruitment process.

The process included a team appointed by the interim board to recruit a group of potential inaugural permanent board members. That group was then vetted by a committee of Canada-wide Indigenous experts.

Wilson described the resulting inaugural permanent board as “an extraordinary group of people.”

“We have a group of directors that we believe to be responsive to all survivors and to represent all parts of Canada,” said Wilson.

Board members are First Nations, Métis and Inuit, with some Francophone representation, and reside in urban, rural, remote and on-reserve locations.

The first recommendation of the interim board sets the areas of focus and key priorities: cultural reclamation, mental health, reunification and supports, education, commemoration, and connection and community building.

The remaining three recommendations are organizational values; long-term sustainability; and naming and branding.

Senator Sinclair, who was the keynote speaker for the virtual board launch, drew a connection between the similarities in trauma experienced by Indigenous children who were in residential schools and Indigenous children in foster and adoptive homes.

“One can say that a healing foundation that establishes initiatives that provide for healing programs or healing initiatives that those children who are now adults, of course, can benefit from would be a useful part of the process going forward.

“One of the things that they should be careful to do is to ensure they are in fact healing initiatives. They should define what kind of healing program (is) to be funded. And they should allow the survivors themselves to be a part of the planning, and part of the development of those healing initiatives, so that they contribute to what really is important to most of the survivors of the Sixties Scoop… That is the sense of reconnection to their identity, to their sense of self, and also to deal with the trauma that they experienced in the system.”

Dr. Raven Sinclair, who was an advisor to the interim board, said long-term stability for the foundation will include fundraising.

The Sixties Scoop settlement also provides $500 to $750 million in compensation to impacted status Indian and Inuit peoples. Métis people do not qualify for individual payments under this settlement.