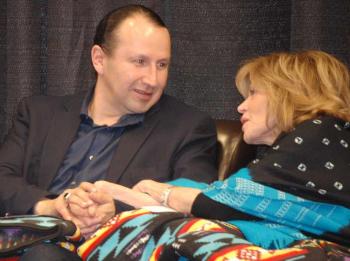 Fonda, who flew over Fort McMurray on Tuesday and then participated in a panel discussion on Wednesday at the University of Alberta, said she wasn’t there to “trash” Fort McMurray or oilsands workers, but to work toward alternative energy solutions.

“If we don’t do what’s right before we hit the tipping point it’s going to be too late,” she said, noting that green energy technology is available.

“The alternatives are much more job intensive. They are there for the having. We just have to have a government that’s supports it and makes the commitment and get (Prime Minister Justin Trudeau) to do the right thing,” she said.

In November, the Trudeau government gave approval to the Trans Mountain pipeline expansion and Enbridge’s Line 3. U.S. president-elect Donald Trump says he will revisit the Keystone XL pipeline decision, a project that was not approved by Obama.

Trudeau rejected Enbridge’s Northern Gateway project and promised to pass legislation to back up a moratorium on oil tanker traffic off the British Columbia north coast.

Fonda lauded the BC Indigenous people – with Grand Chief Stewart Phillip, president of the Union of British Columbia Indian Chiefs on stage with her in Edmonton – for a job well done.

Phillip said it was a decade-long battle that included close to 20 lawsuits. He said the focus was now switching to the Trans Mountain pipeline extension.

However, BC Premier Christy Clark, who was holding off on giving her province’s environmental approval to the project until Kinder Morgan met the five conditions she had set out, did just that on Jan. 11.

Phillip said that the Liberal government’s approval of the two new pipeline projects flew in the face of both Trudeau’s campaign promises and Canada’s commitment following the Paris climate change talks.

Eriel Deranger, spokesperson for the Athabasca Chipewyan First Nation, also condemned the Notley government for having failed to live up to campaign promises.

“It’s been two years since the NDP government has been in power and we have seen very little actual reform and inclusion in Indigenous rights into any new environmental or regulatory legislation. We have seen our rights being sidelined and pushed to the side over and over again to the point that three oilsands projects were approved in 2016,” said Deranger.

She said that the pace and scale of tarsands development had impacted both food security and cultural identity. ACFN would challenge any project slated for the Firebag River area north of Fort McMurray, said Deranger.

“We will do whatever it takes to stop these projects.”

“My nation is not anti-development. My nation understands the economic value the oil sands has given our people through jobs,” said Deranger. “But at what point … do we say no? At what point is enough is enough. We can no longer allow the rights of our people and the environmental stabilization of this planet to be the casualty of business as usual to line the pockets of multinational corporations. It’s time for us to stand together and make another world.”

Fonda was the latest in a line of celebrities, which include musician Neil Young, Hollywood director James Cameron, and actor Leonardo DiCaprio, to speak out against climate change.

“I’ve learned over the 50 years I’ve been an activist that it does help to be a celebrity, to raise the issue and get press to come when they might not come out and cover. It encourages the dialogue and debate,” she said.