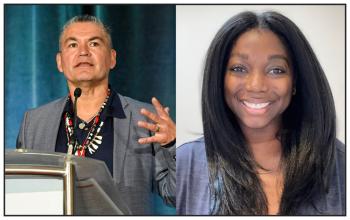 “We all need to work together to contribute to economic reconciliation, and by investing into Indigenous investment vehicles, we put reconciliation to action.” — Shannin Metatawabin, CEO, National Aboriginal Capital Corporations Association
By Sam Laskaris
Local Journalism Initiative Reporter
Windspeaker.com

A precedent has been set.

And Shannin Metatawabin, chief executive officer of the National Aboriginal Capital Corporations Association (NACCA), believes others will follow suit now that the first private investment has been made into the Indigenous Growth Fund (IGF).

The IGF, which is managed by NACCA, was introduced as a new $150 million Indigenous investment fund earlier this year. It was launched to help provide access to capital that some Indigenous businesses have been unable to land.

It was announced June 16 that Block, a technology company that specializes in financial services and expanding economic access to all, is investing $3 million (Cdn) into the fund.

“I think this first investment is a catalyst,” Metatawabin said.

Block’s investment means more Indigenous entrepreneurs will be able to secure loans to either start up or expand their businesses. These loans will flow through various Aboriginal Financial Institutions across the country.

Block, formerly known as Square Inc., was launched in 2005. It changed its name to Block this past December.

Courtney Robinson, who is Block’s global head of financial inclusion, said last week’s announcement is the first of its kind.

“This is our first international investment as a company,” said Robinson, who works out of an office in Washington, D.C. Block’s headquarters, however, are based in San Francisco.

Block’s investment into the IGF is part of her company’s $100 million (US) social investment fund, Robinson said.

“Our team has been working on this for a year,” she said. “It was inspiring to hear some purpose-driven stories. We knew it was a good fit for us.”

Now that Block has announced its support of the IGF, Robinson thinks other private companies will not be far behind.

“I hope so,” she said. “But we’re not in a position to give financial advice to others.”

The Canadian government and the Business Development Bank of Canada provided the lead investments for the IGF.

Nicole McLaren, the founder and CEO of Raven Reads, said even though some Indigenous businesses are successful in Canada and abroad, it can be challenging to access capital and that’s a barrier to their growth.

Raven Reads is a subscription service that provides a curated gift box of Indigenous literature and products from across Canada and the United States.

McLaren was pleased to hear of Block’s investment into the IGF.

“It’s exciting to see consumers and investors supporting the growth of sustainable Indigenous businesses and to see families building wealth that will benefit Indigenous communities for generations,” she said.

Ng said when the federal government invested into the IGF, NACCA officials asked for other partners to come on board as well.

“Block has responded to that call, joining NACCA, and our government, in advancing a societal effort towards reconciliation,” Ng said.

“Block’s investment in the Indigenous Growth Fund is a great step forward in ensuring Indigenous businesses can continue to contribute to their vibrant communities and local economies,” Hajdu said.

“By helping further unlock the creative and entrepreneurial spirit in Indigenous communities, Block is positioning itself as a new partner on the federal government’s shared path towards economic reconciliation.”

Metatawabin said Block’s investment is proof that concerns Indigenous people have within Canada are also well known past the country’s borders.

“We all need to work together to contribute to economic reconciliation, and by investing into Indigenous investment vehicles, we put reconciliation to action,” he said. “Private investors like Block are essential to ensuring the IGF thrives as an enduring and evergreen fund, providing an ongoing stream of capital for Aboriginal Financial Institutions to support future generations of Indigenous entrepreneurs.”

Metatawabin believes it won’t be long before the IGF is supported by other private investors.

“We know this investment will spark and inspire other companies to also contribute to economic reconciliation,” he said.

NACCA is a network of more than 50 Aboriginal Financial Institutions across the country that are dedicated to boosting Indigenous economic growth.