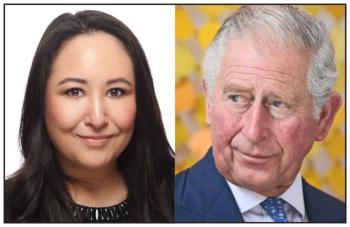 Anita Cardinal is part of a legal action in Alberta to change the requirement of swearing allegiance to King Charles when she takes her oath to become a lawyer.

“I feel it’s a very simple fix, to be honest, and it hasn’t had any negative effects in the provinces that removed that part of the oath. So I feel as if Alberta doesn’t respond to that, it’s likely more political than principled.” — Hadley Friedland, academic director of Wahkohtowin Law and Governance Lodge at the University of Alberta
By Shari Narine
Local Journalism Initiative Reporter
Windspeaker.com

Next spring when Anita Cardinal takes her oath to practise law in Alberta, she’s confident it won’t include swearing allegiance to the king or his heirs and successors.

Cardinal is one of three Indigenous women engaged in legal action against the province and the Law Society of Alberta, the self-governing body that sets standards for Alberta lawyers, to ensure that doesn’t happen.

“That oath in itself is disregarding the full meaning of the treaties and how that was between two sovereign nations. As Indigenous people, we cannot swear (allegiance) because that would be admitting the Crown is our sovereign and the Crown is not. We are our own sovereign people,” said Cardinal, a member of the Woodland Cree First Nation. “No allegiance to each other is necessary to practice law.”

Beyond that, she says, the Crown symbolizes the genocide of Indigenous people in Canada.

“You’re asking people who are victims of genocide…(You’re) asking us to swear allegiance and subjugate ourselves to an institution that has been…a tool of that oppression,” said Cardinal, who is presently articling with the Edmonton-area firm Cooper Regel LLP.

There are Indigenous lawyers in the province, and Cardinal is quick to say, “They’ve done what they’ve had no choice to do so they can go and practise law, because without swearing that you cannot practise law…in Alberta.”

Cardinal is joined in her legal action by Janice Makokis of Saddle Lake Cree Nation and Rachel Snow of the Wesley First Nation.

According to the statement of claim filed Sept. 7, neither Snow nor Makokis, both having graduated with law degrees from different universities outside of the province, have been called to the bar in Alberta. Snow says she will not swear an oath “to the system that has caused generational and ongoing harms to her people,” while Makokis says such an oath is “an affront to her beliefs, laws and conscience.”

Both women want to practise their profession in Alberta.

“The oath requirement,” reads the statement of claim, “breaches their Treaty rights and/or their rights to religious freedom and equality as protected by the Charter of Rights and Freedoms.”

Further, says the statement of claim, the women either seek an exemption from the existing oath or “seek to provide an oath that does not infringe their inherent and Treaty rights, their beliefs or otherwise perpetuate the discrimination against them as Indigenous people…”

A week after filing their statement of claim, the women filed for intervenor status in a similar case already before the Alberta Court of King’s Bench.

In that case, introduced in July, articling student Prabjot Singh Wirring challenged the oath of allegiance as incompatible with his religious beliefs as an Amritdhari Sikh.

However, intervenor status was not granted to the women as the Wirring action was viewed as supporting the Cardinal et al case instead of providing a unique take on the proceedings.

“It was disappointing. Obviously, we were very invested in the outcome because it could affect us for sure. Being able to help in anyway to change that, to be allies in that sense, to support one another in that sense, is going to be helpful to one another for both of our claims,” said Cardinal.

She adds that if Wirring wins, “it will help set a precedent for sure.”

Wirring was scheduled to be heard on Sept. 29 but has been adjourned until Nov. 24 and Nov. 25.

Wirring’s action was supported by law professors from the universities of Alberta and Calgary in an open letter to Justice Minister Tyler Shandro. In that letter, the professors suggested an amendment of the Legal Profession Act to make the oath of allegiance optional. They called it an “uncontroversial step that the Government of Alberta can take to promote diversity, equality and inclusion in the legal profession and across the communities where lawyers serve.”

Hadley Friedland, academic director of Wahkohtowin Law and Governance Lodge at the University of Alberta, was one of the signatories of that letter.

Friedland points to other provinces, such as Ontario and British Columbia, which have either changed their oaths or made them optional.

“I feel it’s a very simple fix, to be honest, and it hasn’t had any negative effects in the provinces that removed that part of the oath. So I feel as if Alberta doesn’t respond to that, it’s likely more political than principled,” she said.

In an email response to Windspeaker.com, Justice spokesperson Katherine Thompson said Shandro acknowledged the concerns raised in the letter by the law professors, but “since the matter is the subject of active litigation involving the province of Alberta, it would be inappropriate to comment on the substance of those concerns.”

Earlier this month, Shandro changed the name of Alberta’s provincial court to the Alberta Court of Justice through an order-in-council. However, Thompson said an oath change isn’t as easy. A Cabinet decision to change the name of the court is set out in the Provincial Court Act, but the same process is not available to change an oath in either the Legal Profession Act or the Oaths of Office Act.

“They can’t unilaterally change it,” said Orlagh O’Kelly, legal counsel for the three Indigenous women. “The oath is legislated…so either it’s amended by (Premier) Danielle Smith and crew or the court strikes it down.”

Cardinal says an optional oath would be determined by working with Elders and could be personalized depending on the nation and the treaty area.

“It certainly is a very exciting thing to think about and that is something we would definitely take our time with and something that would be so meaningful to us,” she said.

Cardinal says there is support for the change even if the province isn’t ready to get on board yet.

“I only think it’s a matter of time and I understand it’s going to be a fight. We’ve been fighting for a very long time and, no matter how long it takes, we’re not going to give up…Us as Indigenous people, we’ll persevere,” said Cardinal.

If the requirement doesn’t change by the time she is called to the bar, Cardinal said, “I’m going to stand there and say everything but the oath.”

Whether that means she won’t be able to practise in Alberta, she said, “Who knows? It all depends because…there have been other students who haven’t said it and they’ve gone through. It all depends.”

The Law Society of Alberta (LSA) could not confirm for Windspeaker.com if that has been the case.

“We do not oversee administration of the oath and have no authority to grant exemptions,” said LSA spokesperson Avery Stodalka in an email.

In an updated statement issued Sept. 28, the LSA said, “While it is not within the power of the Law Society to amend legislation, we support an amendment to the Oaths of Office Act that would create flexibility for articling students by making the oath of allegiance to the King optional.”

Such a change, says LSA, “would remove inequitable barriers to the practice of law in our province.”

No date has been set yet as to when the Cardinal, Snow and Makokis action will be heard.