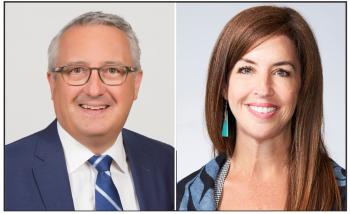 Keith Martell, president and CEO of First Nations Bank of Canada and the new FNB Trust, and Suzanne Trottier, the vice-president of FNB Trust

“From trust set up to administration – we are committed to supporting Indigenous prosperity, leadership and well-being.” — Keith Martell, who is the president and CEO of First Nations Bank of Canada and the new FNB Trust
By Sam Laskaris
Local Journalism Initiative Reporter
Windspeaker.com

The First Nations Bank of Canada (FNBC) has branched out after a quarter century of operations.

Suzanne Trottier, the vice-president of FNB Trust, said First Nations Bank of Canada had long been providing trust advisory information. But without official licenses from provincial and territorial bodies, FNBC was not able to officially provide complete trust services until now.

“We could never offer the trustee services before,” Trottier said. “It was our clients on the bank side who were saying why don’t you do that.”

Though it was only earlier this month that FNBC officials made the announcement they had now secured the proper licensing, Trottier said FNB Trust has actually been operating officially since August.

“We kept it pretty low key,” she said. “It was only if our clients reached out to us that we responded.”

FNBC officials decided now was the time to start their trust company since many Indigenous communities require assistance with the set-up and administration of trusts that have started from either land claim or other settlements or economic developments.

Since its inception, FNB Trust has landed six clients, five in Saskatchewan and one in Manitoba.

And it is already handling about $500 million in assets under its management.

“There are another five (potential clients) that we’re in discussions with and are finalizing engagement letters with,” she said.

FNB Trust has secured the proper licenses to work in every province and territory, except Quebec.

Trottier anticipate that final license, which is taking a bit longer to secure as it involves bilingual paperwork, will be finalized soon.

Keith Martell, who is the president and CEO of both FNBC and FNB Trust, is thrilled more responsibilities have been taken on.

“Now we are bringing our community focus, care and attention to Indigenous Trust Services through our subsidiary, FNB Trust,” he said. “From trust set up to administration – we are committed to supporting Indigenous prosperity, leadership and well-being.”

The FNBC is a privately held Canadian chartered bank. It has nine full-service branches and nine community banking centres and more than 14,000 customer accounts.

It is primarily owned (more than 80 per cent) by Indigenous shareholders from across the country.

Its Indigenous shareholders include groups from Saskatchewan, Alberta, Manitoba and Quebec as well as the country’s three territories, Nunavut, Yukon and Northwest Territories.

So far all of the FNB Trust clients are Indigenous.

More than 90 per cent of the commercial loans FNBC has worked on have been for Indigenous governments, organizations and businesses.