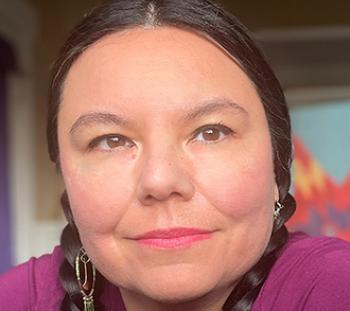 “With each new generation, I feel like people recover a little but more and are able to give their children a little bit more than they had, and then that gets passed on. And that’s beautiful.” —Eden Fine Day
By Emil Tiedemann
Local Journalism Initiative Reporter
Windspeaker.com

Cree musician, author and visual artist Eden Fine Day has been named the 2022 Indigenous Storyteller In Residence with the Vancouver Public Library.

In addition to engaging with the community through various programs, workshops and events that will incorporate multidisciplinary storytelling techniques, Fine Day will also contribute a number of her own projects during her residency. This includes a novella based on Fine Day’s own experiences growing up in East Vancouver, titled Dreamwalker, as well as a new solo album that is already in the works.

The Indigenous Storyteller In Residence program was originally created in 2008 as a way to learn from and about the Indigenous communities in the Vancouver area through the traditional art of storytelling.

Fine Day’s focus will be on sharing her culture and stories with the Indigenous youth across the country.

“I just want to create that shared understanding, so I’m happy to share my personal life,” she said. “I’m happy to talk about my family’s history, what I know of my culture and what I’ve been taught about my great, great grandfather…what our role has been in our own community.

“I just want to share it all, because I think there’s really a power in sharing that with everybody. I’m so excited about being given this platform.”

Fine Day, who is originally from the Sweetgrass First Nation in Saskatchewan, has been writing poetry and songs since her teens, later fronting an all-female rock band named Vancougar during the ‘90s.

In between, she spent time living in California, where she felt “cut off” from her First Nations culture and identity.

“Everyone assumed I was Mexican,” Fine Day said, “and nobody there even believes that Native Americans still existed….Nobody I knew had heard of the Cree people. I was in a foreign land.”

Upon her return home to Vancouver in 2003, Fine Day says “coming back to Canada sort of forced me to and helped me to reembrace me identity, and I was excited about that, because I knew it would.

“I remember saying, ‘There’s way more racism against Native people in Canada but at least people know we exist.’ Down [in California], nobody knows Native people exist; at least, where I was living. There was no awareness.”

Although Fine Day has always felt far more connected to her First Nations roots back home in Canada, she is aware that simply being Indigenous creates barriers and struggles throughout life.

“I think there are barriers for every person of Indigenous descent,” she said. “I have rarely met a Native person who doesn’t have PTSD (post traumatic stress disorder). I myself have been diagnosed with PTSD. I can guarantee you that most members of my family would qualify for diagnosis. We are a traumatized people and that creates a barrier in every way.”

While Fine Day recognizes that many Indigenous youth have turned to drugs and alcohol to deal with generational trauma, many others – such as herself – have turned to art. She says that art and culture helps to “connect ourselves to our own spirit and gets us through those really tough times. Because, even when I felt like nobody’s valued me, I at least could listen to myself by writing a song. It was like a way of paying attention to myself, which is a little bit like medicine.”

Despite these ongoing struggles for the Indigenous communities, Fine Day remains hopeful for the youth.

“I can say that I am so impressed with, now, how much healing is taking place in our nation,” she said. “With each new generation, I feel like people recover a little but more and are able to give their children a little bit more than they had, and then that gets passed on. And that’s beautiful.”

She said that’s why we’re seeing healed youth assert themselves saying “‘We deserve everything that you guys have. We deserve to live in a comfortable place and drink clean water and be celebrated just like the way that everyone else is celebrated.’ These younger kids know that they’re worth it and I love that.”

Through her new role with the Vancouver Public Library, Fine Day wants to contribute to this movement by helping others to learn, share and embrace their Indigenous culture.

“I believe culture saves lives,” she said. “If I’m able to speak about my culture to other people, I’m actually sharing my culture, and there could be other Native folks in the room who also felt disconnected and who are also confused about where they stand… if they belong.

“When we feel connected to our culture, we heal. That’s my experience, and so by me sharing my life in the context of being an Indigenous person, I think it becomes medicine. I think connection is medicine, and storytelling is one way to create that connection.”