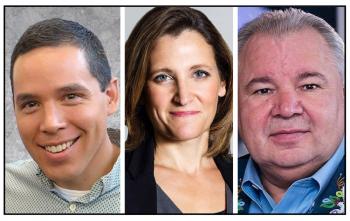 Bill C-15 is “fundamentally flawed legislation that undermines the provisions under Treaty Six … (and which) will have a negative impact on our Treaty Rights.” — Confederacy of Treaty Six First Nations
By Shari Narine
Windspeaker.com Contributor

The federal government has delivered its first budget in two years and it includes record spending of $18 billion over five years targeting Indigenous peoples, businesses and communities.

Finance Minister Chrystia Freeland reiterated the importance of the federal government’s relationship with Indigenous peoples, committing to “build a nation-to-nation, Inuit-Crown, government-to-government relationship, one based on respect, partnership and recognition of rights.”

The first-ever female federal finance minister in Canada’s history committed funding to specific Indigenous measures, as well as highlighting the inclusion of Indigenous peoples in broader Canadian initiatives like green energy and justice reform. The budget document, which is 724-pages in length, states 13 per cent of targeted support is specific to Indigenous communities and businesses.

“There's a number of things that look very good, but there's not a lot of distinctions-based focus in the exact dollar amounts,” said Inuit Tapiriit Kanatami President Natan Obed in a television interview.

Moving forward, he said, that meant “ongoing conversations” to determine how the money would be allocated, as well as various federal departments making the decisions.

David Chartrand, president of the Manitoba Metis Federation, acknowledged the significant spending, but also raised concerns about the lack of specifics.

“We will need to do a lot of work to understand what the funding impacts are for Métis Nation amongst the Indigenous allocations,” Chartrand said in a statement.

The budget commits $1.2 billion this fiscal year to support continued health measures for Indigenous communities in their response to COVID-19, including hiring more nurses, meeting isolation needs and addressing food security. Indigenous students facing financial difficulties in pursuing their post-secondary education will be supported with $150.6 million over two years.

The government also pledged to introduce legislation to ensure the First Nations Election Cancellation and Postponement Regulations, parts of which were recently struck down in federal court, would allow chiefs and councillors the ability to extend their terms to “prevent, mitigate or control the spread of diseases on reserve, including COVID-19.”

The budget has also committed $31.5 million over two years for the co-development of an action plan to support the implementation of Bill C-15, the United Nations Declaration on the Rights of Indigenous Peoples Act.

That’s a budget line that is “a further insult,” said the Confederacy of Treaty Six First Nations, which in a statement called Bill C-15 “fundamentally flawed legislation that undermines the provisions under Treaty Six … (and which) will have a negative impact on our Treaty Rights.”

Other funding directly related to legislation is $73.6 million over four years for the implementation of the Act Respecting First Nations, Inuit and Métis children, youth and families; and a commitment of $275 million over five years to Canadian Heritage to support reclamation, revitalization and strengthening of Indigenous languages.

To address racism and discrimination in the health system, $126.7 million over three years has been committed to support patient advocates and cultural safety training for medical professionals.

“I hope that that money is spent on upholding human rights. I hope that this goes beyond this idea that with a little more training and cross-culture awareness that health care systems are going to cease to be inherently racist,” said Obed.

Indigenous women also figured prominently, receiving funding in a wide range of areas. The budget commits to $22 million over the next three years to support the National Aboriginal Capital Corporations Association’s Indigenous Women’s Entrepreneurship Initiative. In response to the Calls for Justice for murdered and missing Indigenous women and girls the budget commits $2.2 billion over five years; $724.1 million to launch a comprehensive Violence Prevention Strategy, which will support new shelters and transition housing on-reserve and in urban settings; and $36.3 million over five years to enhance support for Indigenous women’s and 2SLGTQQIA+ groups to participate in Crown-Indigenous Relations decision-making.

For governance, the budget offers escalating 10-year grants to provide $2.7 billion over 10 years; and supports administrative capacity for First Nations governments and organizations with $104.8 million over two years.