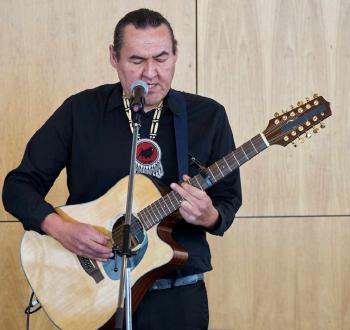 “I’m giving it credit. I’m saying it was well done… It’s a small piece but it’s adding to the conversation, making the understanding of First Nations presence naturalized.

“Making it a naturalized knowledge, that it’s not a foreign thing when you have a conversation about music or farming or economics or law. You incorporate Blackfoot values or the Indigenous values of the area into the conversation… and I think that’s how this, or something like this, can contribute to reconciliation,” he said.

The exhibition, which features 150 years of music in southern Alberta, right up to today’s regional music scene, received a “proper” opening Feb. 4, said Provost. A blessing from community Elder Pat Provost and a hand drum song highlighted the musical history which starts with the Blackfoot people.

“For me, personally, it was really important to show to people who come to the exhibition that Blackfoot people have been making music in southern Alberta long before it was ever called southern Alberta,” said guest curator Tyler Stewart.

“I think it’s really important to acknowledge that this land is Blackfoot territory and it has been for thousands of years. And really, they’re the first musicians in the area and the musical culture we have now started with them.”

Stewart approached the Galt Museum about three years ago, pitching the idea of a temporary exhibition about the history of music in the region. At that time he was working at the National Music Centre in Calgary.

The exhibition includes objects from the Galt’s collection, as well as interactive stations where people can both listen to music and create their own on a piano and drum kit. Interpretive panels set out chronologically how music has “changed and evolved and shaped our community over time and that kind of starts with the Blackfoot people,” said Stewart.

Stewart admits he never expected the tradition of Blackfoot music and ceremony to play such a prominent role in the exhibition. But then again, when he first started doing his work, he hadn’t yet met Provost, a Piikani Elder, a contemporary musician and an educator.

Provost is quick to extend credit to Stewart for being willing to listen, to adapt and to include the Native voice in his exhibition.

“I don’t think in the beginning he was looking necessarily for First Nation addition as much as he did in the end,” said Provost. “Of course, Blackfoot people have a rich history. Music is still very much part of our ceremony. The songs, ceremonies and stories, they’re one and the same. Back then and today they’re very much practised. It was all encompassing… it was a part of everything.”

For Stewart, it was vital that story be told by Provost and other Blackfoot Elders.

“It’s important to tell that kind of history not from a settler perspective, but from a Blackfoot perspective. That kind of information around Blackfoot musical tradition and culture,” he said.

Provost worked with Blood Tribe councillor and musician Lance Tailfeathers, Blackfoot Elders and other musicians to develop the narrative.

“It’s extremely important (to have the Blackfoot voice included) because it hasn’t been there. Not just with music per se, but just into the natural narrative of a lot of things, especially when we talk about history,” said Provost.

Stewart says museums are embracing the trend of having people tell their own stories, which makes those stories more powerful and more relevant.

“In my opinion, the curator’s role is to bring stories to life and to bring those stories from the community to the community,” he said.

Pianos to Power Chords runs through to April 30 at the Galt Museum in Lethbridge.