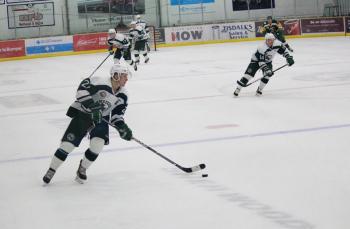 Cody Hodgson with the puck heads to Oklahoma

Following an up-and-down year in what proved to be his final season of junior hockey, Cody Hodgson is now south of the border looking to commence his university career.

The 20-year-old, a member of Alberta’s Ermineskin Cree Nation, is a rookie forward with the University of Central Oklahoma Bronchos men’s hockey team.

The Bronchos, a Division 1 squad, compete in the American Collegiate Hockey Association (ACHA). Like the better known NCAA, the ACHA also sees its divisional champions vie for national championships.

The Central Oklahoma squad captured national titles in 2015 and 2017.

Hodgson is on a partial scholarship with the Bronchos. He also had some interest from Alberta colleges that were considering his services for this season.

But he chose to head south of the border instead.

“I’ve known about the school (Central Oklahoma) for about two- three-years,” said Hodgson, whose great uncle Ted Hodgson played four games with the NHL’s Boston Bruins during the 1966-67 season. “And it was a good offer they gave me.”

Hodgson is studying Business at the school, located in the city of Edmond. He admits he was wondering how he would adjust to being a student/athlete again, since he has not had any schooling since graduating from high school three years ago.

“I’ve been adjusting well,” Hodgson said of his first few weeks at the U.S. school. “I was an average student before. It’s a lot different now (focusing on hockey and school again). But it’s coming along nicely.”

Hodgson is also hoping he can stay injury free while playing for the Bronchos. Such wasn’t the case for him during the 2017-18 season.

He began last year with the Kindersley Klippers, a Junior A squad in the Saskatchewan Junior Hockey League.

But after 19 games with the Klippers, the club he had also suited up for during the 2016-17 campaign, Hodgson sustained a serious concussion. It was the third diagnosed concussion of his career.

“When I got hit in October I didn’t know if I would play again that season,” he said.

Once it looked like Hodgson would be able to return to the ice last year, he decided to play in the Junior B ranks instead of returning to the Klippers.

“It was less practices,” he said of the Junior B ranks. “And I needed to have my head heal mentally and physically.”

Instead of going back to Saskatchewan after he was cleared to play, Hodgson opted to sign with the Frog Lake T-Birds, members of the North Eastern Alberta Junior B Hockey League.

He earned 16 points, including 12 goals, in 10 regular season matches with the T-Birds. And then he went on a tear in the playoffs, leading the league in scoring by racking up a whopping 36 points (17 goals and 19 assists) in 16 matches.

Before deciding to join the T-Birds, Hodgson said he spoke to officials from all of the post-secondary schools that were showing an interest in him.

“I was talking to them all before I stepped down from Junior A,” he said. “I asked them if they were okay if I played Junior B for the rest of the year and they all pretty much said yes.”

Though he had the chance to remain in his home province and play at the college level, Hodgson opted to head to Oklahoma instead.

“It was because of the weather and the opportunity,” he said. “And the team has won league championships and national championships.”

The Bronchos will kick off their 2018-19 season this Friday with a home game against Niagara University.

While he is rather far from home, Hodgson said several others are also in the same situation.

“There’s actually quite a few Canadians here,” he said of his teammates. “But not anybody from my area.”

And though he is a rookie, Hodgson is hoping to have an immediate impact with the Bronchos.

“You want to be getting a lot of ice time,” he said. “Right now I’m on the third line which puts me among the top nine forwards. That’s where you want to be especially if you’re a rookie on the team.”

Hodgson, who is 5-foot-10 and 185 pounds, said he wasn’t able to put any pounds onto his frame as he prepared for his first university season.

“It’s tough for me to put on weight,” he said. “I just put on some muscle mass.”

Hodgson added it will take some getting used to playing with and against older individuals now.