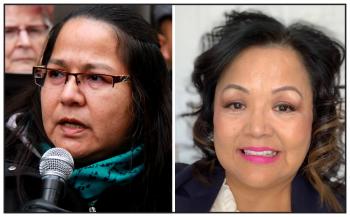 “We have made it clear to them that if you insist on going up to arrest our people, our relatives up there, we do not want to see any loss of life nor do we wish to see any of our people seriously injured. We let them know that our people are watching everything that's going on up there and we've communicated very effectively to government, to the RCMP and to the hereditary chiefs about this.” —Chief Maureen Luggi of the Wet’suwet’en First Nation
By Shari Narine
Local Journalism Initiative Reporter
Windspeaker.com

An emergency resolution calling for “de-militarizing” RCMP from using force against defenders of traditional lands was withdrawn at the Assembly of First Nations gathering because chiefs felt uncomfortable wading into the struggles between hereditary chiefs and elected chiefs in Wet’suwet’en territory.

The “Peaceful resolution of disputes involving Indigenous title and rights” motion was introduced Dec. 7. Although the motion was to deal with the recent police action taken against land defenders protesting construction of the Coastal GasLink pipeline in B.C., it was Chief Lance Haymond of the Kebaowek First Nation in Quebec who moved it.

“My purpose of getting involved was I see a lot of similarities. What’s happening with the Wet’suwet’en people resonates clearly with me, because what I see is people trying to defend their territory,” said Haymond.

He called the use of RCMP force unnecessary against peaceful land defenders.

Twenty-nine people were arrested in two days in mid-November as the RCMP enforced a 2019 court injunction tearing down camps and blockades to allow construction of the pipeline to continue.

One RCMP takedown of defenders was caught on video. The arrest included a photojournalist and a documentary maker. Sleydo' (also known as Molly Wickham), a key voice of opposition and organization against the pipeline, was also arrested.

Neskonlith Indian Band Kukpi7 Judy Wilson, who seconded the motion, said action had to be taken to push the British Columbia government and Public Safety Minister and Governor General Mike Farnsworth to stop such police action from happening again.

“What the resolution is pointing out is the human rights framework and also the intent to de-escalate these tensions that are occurring in the BC lands … that could easily happen throughout the territories of other lands across Canada,” said Wilson.

However, support for the resolution was quickly derailed when Chief Maureen Luggi of the Wet’suwet’en First Nation called the resolution “very highly inappropriate” and requested that it be withdrawn.

“I view this as the AFN being asked to take sides in the internal affairs of Indigenous Wet’suwet’enNation that normally should be resolved internally,” she said.

Luggi said that both hereditary and elected chiefs had requested meetings with BC Minister of Indigenous Relations and Reconciliation Murray Rankin and Crown-Indigenous Relations Canada Minister Marc Miller. She added that a resolution had been passed by the BC First Nations Summit calling for Canada and BC to work with both elected and hereditary chiefs to design a “proper negotiation process” with the Wet’suwet’en people.

She also said that RCMP have met with elected and hereditary chiefs.

“We have made it clear to them that if you insist on going up to arrest our people, our relatives up there, we do not want to see any loss of life nor do we wish to see any of our people seriously injured. We let them know that our people are watching everything that's going on up there and we've communicated very effectively to government, to the RCMP and to the hereditary chiefs about this,” said Luggi.

She highlighted one point in the resolution as “quite concerning.” It called upon the AFN to direct the federal and BC governments to respect the Dec. 13, 2019 decision by the United Nations Committee on the Elimination and Racial Discrimination to “immediately halt the construction and suspend all permits and approvals …in the traditional and unceded lands and territories of the Wet’suwet’en people, until they grant their free, prior and informed consent ….”

Coastal GasLink has approval from all the elected chiefs along the pipeline route. However, Wet’suwet’en hereditary chiefs oppose the development.

Luggi called on BC Regional Chief Terry Teegee to comment on the resolution.

It’s a “very difficult and touchy situation,” said Teegee, who also pointed out that the AFN represents elected chiefs.

“The matter in Wet’suwet’en … is certainly something that is very concerning in terms of the police action (and) is a bigger issue in terms of how the RCMP reacts and interacts with our Indigenous peoples,” said Teegee, who is also co-portfolio holder for justice and policing.

“I don’t like to see the military-style action taken against the people who are standing up for their rights either,” said R. Don Maracle, chief of the Mohawks of Bay of Quinte.

However, Maracle did not support the resolution because he didn’t “feel comfortable taking sides on what’s an internal dispute there.”

Haymond offered to withdraw the resolution because of Luggi’s concerns.

However, at the end of the discussion Tuesday, the resolution was tabled to the following day with a commitment from National Chief RoseAnne Archibald that her chief of staff would work with Haymond, Wilson and Luggi to amend the resolution to address Luggi’s concerns and to focus on the de-escalation of violence RCMP have used in apprehending land defenders.

“We always want to be respectful of local matters and not to insert ourselves as the Assembly of First Nations into places where we simply don’t belong,” said Archibald.

But on Dec. 8, it was announced that the resolution had been withdrawn.

The actions by the RCMP were addressed by NDP leader Jagmeet Singh who spoke to chiefs in assembly Thursday evening.

“We’ve asked (the federal government) for a review of what happened specifically in Wet’suwet’en. We saw those horrible images and it is painful to see militarized RCMP committing acts of violence against Indigenous people, particularly Indigenous women. We are deeply concerned by that and have been pushing for a review (of) what happened, as well as an overhaul of the RCMP approach. We want to make sure that for the Wet’suwet’en people that we support their own decision-making and governance and are allies and supporters in that way,” said Singh.

Wilson told Singh that a resolution addressing RCMP tactics had been introduced the day before but had been withdrawn.

“It’s affecting all of our Nations across Canada and we do have to do something about it…. The use of military force and violence against Indigenous people on the ground, and it’s not just happening at Wet’suwet’en here. It’s happening everywhere … We really do need to get to that issue,” said Wilson.

A second emergency resolution, “De-escalating Royal Canadian Mounted Police and United Nations Committee on the Elimination of Racial Discrimination,” was withdrawn without discussion.