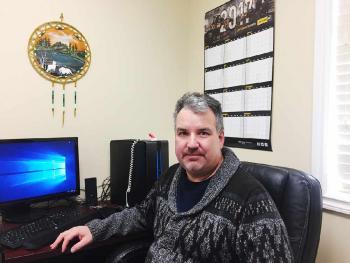 Mike Kortuem, office manager with BOSS, says oil and gas development must be done responsibly and in a way that provides “meaningful benefits to First Nations.” (Photo: supplied)

Over the nearly 10 years that Mike Kortuem has been office manager with Bigstone Oilfield Services and Supplies, he has seen more than 500 employees–85 per cent of them Bigstone Cree Nation members–get employment primarily in the oil and gas industry.

BOSS, incorporated in 2007, is wholly-owned and operated by Bigstone Cree Nation. It has worked with 12 to 15 companies, many of which are in the oil and gas industry, to place trained workers in their ranks, as well as to provide equipment and operators.

CNRL, Cenovus Energy, Husky Energy and Tidewater Midstream are BOSS’ main oilfield clients. Most placements are seasonal and at the entry level.

“Like any industry, the entry level positions in the oilfield have a high turnover,” said Kortuem. “Yet there are still a few workers that have been here since before I started and many more that are making a career of working in the oil and gas industry.”

Prior to the oil price dropping in 2014, BOSS typically had 130 to 150 workers in the field at any given time. But a hurting oil industry has meant clients demanding lower prices for services. BOSS has had to reduce the number of workers its places.

That hit in unemployment has been been felt on an individual basis, says Kortuem, more than it has at the Nation level.

“Quite a few members have jobs and successful careers and a few have become reasonably wealthy, but there has been very little benefit directly to the Nation. I know some clients may cringe reading this, pointing out the many financial donations made over the years, but it has been very little compared to the wealth removed from the land,” said Kortuem.

Band enterprises struggle and he notes that it has taken years for BOSS to be successful. Even with the downturn in the oil and gas industry, Kortuem says BOSS remains “healthy” with 98 workers on its payroll at this point.

BOSS has diversified – including providing security and medics – and is depending more on its non-oilfield jobs, including a new Wabamun-to-Fort McMurray powerline.

Kortuem is anticipating these new projects will raise BOSS’ workers to 130 this winter.

But, KortueBOSS has diversified – including providing security and medics – and is depending more on its non-oilfield jobs, including a new Wabamun-to-Fort McMurray powerline.m admits, diversification does not include training anyone in green energy.

“No plans have been made as of yet, but if there are realistic opportunities, they would greatly interest the company,” he said.

While Kortuem isn’t aware of any green energy projects in his region, further north, Bradley Calihoo, CEO for Fort McMurray First Nation, says that over the past year his nation has invested more than $1 million in green energy initiatives, such as solar, thermal and “potentially looking at capturing the waste heat off of these plants to generate electricity.”

That investment money, says Calihoo, comes from Christina River Enterprises, a wholly-owned and operated band company that provides long-term and short-term contract services to clients in the oilfield.

“We work with our industry partners and a lot of our successes revolve around our partnerships and our relationships with industry,” said Calihoo. “We use a percentage of the profits from our band-owned businesses to provide to the community.”

Over the past four years, 44 homes have been built in the community, all without government funding, he points out. As well, money made through industry partnerships has augmented education, health, social and cultural services.

“We know that with the economic times, the oil and gas sector has not been very well. For us it’s about diversity,” said Calihoo. “We look at everything across the region … across Canada, across the world for economic opportunities. We’re not focused on oil and gas. It’s just one part of our economic portfolio.”

But money from that “one part” is what First Nations that benefit financially from oil and gas development will be using to pursue green energy initiatives, says Stephen Buffalo, president and CEO with the Indian Resource Council.

The IRC is a national organization which represents 150 First Nations with oil and gas production, potential producers, and with current pipeline infrastructure going through their communities.

“In moving forward we need the capital to buy the wind power, to buy the solar energy, anything that would really help with the green energy to get away from the fossil fuels. But the reality is, the government ain’t going to give us all that money, all 640 First Nations, so we’ve got to get our own capital somewhere. And I think with the existing reserves of fossil fuels and oil and gas and what have you, I think that we have to continue to utilize it as a revenue source and it will help with the infrastructure of our communities and find better ways of being greener,” said Buffalo.

As far as Buffalo is concerned, there is no doubt that First Nations that partner with the oil and gas industry have seen benefits “because there’s revenue going through that pipe(line) every year.”

But getting revenue does not mean that those First Nations want to see uncontrolled and unregulated oil and gas development.

Buffalo says the Resource Council is currently working with Indian Oil and Gas Canada to modernize existing regulations to include an environmental module.

“It’s a big monster. We get one shot at it and we’ve got to make sure we put our best foot forward, obviously keeping Mother Earth in mind. It’s protecting the waters, protecting what we have,” he said.

An environmental module is not the only improvement needed when it comes to First Nations working with the oil and gas industry, say both Calihoo and Kortuem.

“I know the present government is working to change that but it hasn’t come to fruition now. It’s hard for a First Nation of our size to compete on a capacity level when it comes to consultation. We’re hoping that changes. We’re working with all levels of government along with industry to make that change.”

Calihoo says that Fort McMurray First Nation chief and council have set a mandate “to be a self-sufficient Nation for the next seven generations.”

“It is true companies pay significant taxes to the local municipality, but none go to the Nation. I don’t know of any government that can survive and be healthy without a tax base. Many Canadians resent federal monetary transfers to First Nation bands, but without the ability to tax industry, it seems bands are stuck taking such transfers,” said Kortuem.

“Ultimately, I think development should be done in a responsible manner that both protects the land and people, and provides meaningful benefits to First Nations. To date, the benefits have been decidedly lacking,” he said.