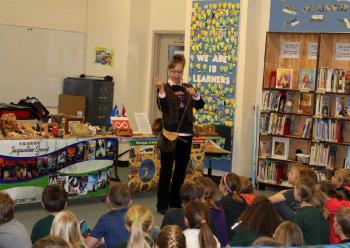 (January 17, 2017) With her children eating macaroni and cheese for supper and classical music playing in the background, single mom Jacqueline Guest would tell them “fantastic stories of monsters and dragons.” It was a form of entertainment when there was “a lot of bills and not a lot of cash.”

Twenty years after that vivid imagination was turned into her first published children’s novel, Guest is the recipient of the Order of Canada.

“It’s amazing,” said Guest, who admitted she didn’t know she had been nominated and when queried further found out that names of nominators are not released.

“Children’s authors don’t often get this kind of recognition or accolades so I was quite surprised. It’s been great because, first of all, I love it when any of the arts are recognized for their contribution, but when it’s writing and, in particular, children’s writing, that is so awesome.”

Guest says she can’t count the number of times she has been asked when will she write a “real” book when someone finds out she’s a children’s author.

Guest went from telling stories to her children to writing short stories, which got “longer and longer.” It was her husband who convinced her to send her work to an agent.

Her first attempt at a full-length novel was sent back to her “with a lovely rejection letter,” but the agent, recognizing Guest’s talent, requested she try again. And try again Guest did, and was published in 1997.

Now she has 19 young adult and middle grade fiction books published, some of which are national and international award winners.

Guest has been a story lover forever.  Her Métis father (Guest’s maiden name is Tourond) would tell her First Nation myths and legends and her mother, a Welsh war bride, had a “rich, fantastic Celtic background.” Stories and music united the cultures.

And as a child, Guest would lose herself within the pages of books.

“I specifically chose (to write) children’s literature because growing up, books were my salvation. They saved me. I could climb inside a book and I was safe and I was gone from whatever was going on and I controlled it. Because whenever it got too scary or too intense or whatever, I could close the book. I was in control,” she said.

But what she discovered in her reading was the lack of Indigenous characters.

“I wanted kids to appreciate Canada—and all kids in Canada—and that’s why I simply decided to put in all the kids I never read about when I was growing up, like the Inuit kids, the Métis kids, the First Nations, they were never in books,” she said.

Guest soon remedied that. Hat Trick, her first published novel, is a story about a Metis girl who plays hockey on an all-boys team.

She has continued writing about Indigenous characters and one of her better known novels is Belle of Batoche, a historical fiction which casts an 11-year-old Métis girl in the midst of the troops that surround Batoche in the 1885 Riel Rebellion.

It’s this diversity that the Writers Guild of Alberta recognized when congratulating Guest, a WGA member, on being honoured.

“Her work has advanced diversity in children’s literature, promoted Indigenous culture, and made excellent contributions to youth literacy, and we are thrilled to see these achievements recognized,” said WGA on its website.

Guest reaches a wide variety of young readers through her historical fiction, sports novels and fast-paced mysteries. She also sets her stories locally so kids can tag to events they are familiar with, like the Calgary Stampede. And “in between the lines” she teaches about tolerance and understanding,

“Kids often get what is hinted at or suggested but not dwelled on. This is why you don’t have to beat kids over the head with concepts and ideas. Kids are smart. We don’t give them enough credit,” she said.

Guest whets their appetites and spurs them on to further discovery on their own. Guest is also reaching children through classroom visits. Her presentations are visual and interactive and range from discussing the fur trade era to the Northwest Rebellion and Métis rights.

Like most Canadian authors, Guest doesn’t make her living through writing and royalties alone. Her work for educational publishers, school presentations, keynote addresses and workshops supplement her writing income.

Guest says she is still in the process of coordinating a date with her family as to when they will be traveling to Ottawa so she can be presented with the Order of Canada.