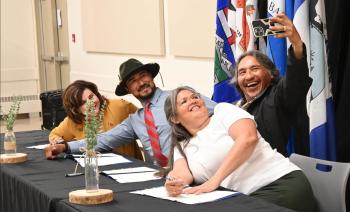 Kendrick Cardinal is confident that it will take less than the three-year timeframe given to establish a community-based education authority, as it’s set out in a memorandum of understanding signed by the Indigenous leaders in Fort Chipewyan with the province of Alberta.

“I say if we’re hard at it, I say two full years,” said Cardinal, president of the Fort Chipewyan Métis local.

“We’re here about the children. We’re about making things better,” said Education Minister Adriana LaGrange, who signed the MOU on behalf of the province in a ceremony on Sept. 6 in Fort Chipewyan.

LaGrange said the first time she visited the community in 2019, she was made aware that none of 12 students eligible to graduate from the Northland School Division, which operated Athabasca Delta Community School, had achieved that milestone. The K-12 school opened in 1986.

“That is unacceptable. That will never happen again and what we’re doing today will ensure that never ever happens again,” said LaGrange.

Prior to signing the MOU, the community had already taken steps to begin to address concerns about the education of their children, noted Mikisew Cree Deputy Chief Roxanne Marcel.

Partnering to operate that community school and seeing its success demonstrated why the community had “lost hope” in Northland School Division, says Cardinal.

“We just wanted a new start and (to) have more of a say in our curriculum, as well as more of a local representation as to the education authority,” he said.

The MOU recognizes that “preserving, supporting and revitalizing the language, culture and identity of First Nations and Métis people” is a priority for the community-based educational authority.

In preparation for establishing the new authority, education services for the Athabasca Delta Community School (ADCS) were transferred in June from Northland to the Parkland School Division (PSD) in the interim.

The search for an interim education authority began in 2021. Six public school divisions were approached and PSD was chosen.

“They made it very clear that they wanted to be part of our community and reconciliation and also provide as much Indigenous content as possible,” said Cardinal.

In a post June 24, PSD announced the “unique opportunity and partnership” in assuming operation of the Fort Chipewyan school for the 2022-2023 school year.

In the same posting, Northland superintendent Nancy Spencer Poitras stated, “In the spirit of what is in the best interest of the students and community of Fort Chipewyan, we are happy to transition operation of ADCS to Parkland School Division. We are very supportive of the move and will do what is needed to ensure there is a smooth transition.”

“We just want to make sure our Indigenous peoples speak for themselves. As time goes on, we’re getting more enhanced with education as well. Indigenous people are becoming smarter, they’re taking a (hold of) their lifestyle and culture, as well as their identity,” said Cardinal.

LaGrange announced that the government would provide $150,000 to help the Indigenous partners engage members of their communities in establishing the educational authority.

As well, the 2020 provincial budget includes $23 million for a new K-12 school that can support up to 320 students. A statement from the government says work is ongoing to define the scope of the project and identify the site for the school.

Cardinal expects construction on that school to get underway shortly and says it will take three years to complete.