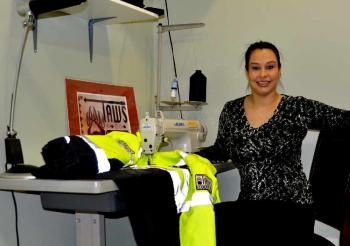 Isabell Ringenoldus sewed all the crests on her uniforms when she started TAWS Security. “My first sewing machine was just a Singer from Walmart (and) after a few hundred patches it had to be retired,” she recalled. (Pho

When Isabell Ringenoldus started TAWS Security in 2007 it was to ensure she had a job. Now she employs 120 people and led security on the ground when the largest fire in Canadian history swept through the Fort McMurray area last May.

Her success and her desire to go above-and-beyond did not go unnoticed. The Canadian Council for Aboriginal Business named Ringenoldus the recipient of the 2017 National Youth Entrepreneur of the year award.

Both Ringenoldus and Belcourt will be presented with their awards tonight, Jan. 31, at the CCAB annual Toronto gala.

“It’s truly an honour,” said Ringenoldus. “There are so many other Aboriginal entrepreneurs that deserve it. I’m really excited that I won it for 2017.”

Ringenoldus says when the fire hit the Regional Municipality of Wood Buffalo, she and her employees evacuated 60 km south and stayed in a camp. She kept phoning the authorities until she got a hold of the right person and volunteered her company to help out with security.

Her offer was quickly snapped up and her security company was on the ground within 12 hours of the evacuation. First, her employees were paid by TAWS, but eventually TAWS got a contract to cover their costs.

“Our scope of work grew almost as rapidly as the fire,” said Ringenoldus.

TAWS developed the security mitigation plans for the region and led the five security providers that eventually returned. TAWS Security’s COO CJ Quition was made director of private security of Regional Municipality of Wood Buffalo for the wildfire.

“We also had more personnel and equipment on the ground than any other provider for weeks. I think this speaks volumes in our level of preparedness in regards to the amount of supplies and resourcefulness of my office team and being a truly local company,” said Ringenoldus.

“I’m extremely proud of my TAWS team,” she said.

Ringenoldus, a member of the Fort McMurray First Nation, graduated high school in 2001. She initially worked as a waitress before putting herself through school to become a corrections officer. She held that position for a few years, but says although she loved her work, she didn’t feel she was making a difference in people’s lives.

So she switched careers and became a security guard at an Enbridge site in the Regional Municipality of Wood Buffalo. In 2007, when the recession hit, she was laid off.

In November 2007, she started TAWS Security. The company is named for her nephew, Tanner Alan William Sitybell, who passed away of leukemia.

“Naming my business after him was my way of keeping his memory and name alive,” said Ringenoldus.

She received her first contract in January 2009 with Enbridge. She hired her first staff member when the contract included a night time shift. As her number of employees grew, Ringenoldus continued to do all the company administration, even sewing the patches on to the uniforms herself. It wasn’t until she hit 40 employees that she hired her first operations manager, bookkeeper and safety officer.

Ringenoldus says her company has far surpassed her expectations.

CCAB’s National Youth Entrepreneur award recognizes an up-and-coming Aboriginal entrepreneur under the age of 35. Ringenoldus also received a $10,000 financial award, which she donated back to CCAB.