Cree director wins at Sundance for her film Fast Horse 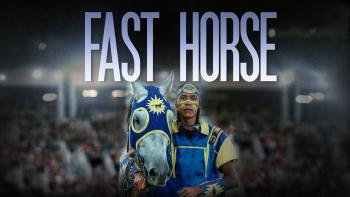 Fast Horse is about the sport of Indian Relay and the attempt to win the Indian Relay championship at the biggest show on earth, the Calgary Stampede.
By Jeremy Harpe of CFWE 88.1 FM Calgary
Windspeaker Radio

Alexandra Lazarowich said she aspires to make films that inspires Indigenous kids to keep living, to do something, be something amazing.

“A lot of the times we end up as dead bodies in films,” she said of Indigenous people in the movies, with cinema’s often traumatic storylines.

Lazarowich’s recent film Fast Horse, however, which took home the 2019 Sundance Short Film Special Jury Prize for Directing, inspires through the courage of Cody Big Tobacco, a jockey in the extreme sport of Indian Relay. He’s on Allison RedCrow’s Indian Relay Old Sun team of the Siksika Nation. Fast Horse is about the sport of Indian Relay and the attempt to win the Indian Relay championship at the biggest show on earth, the Calgary Stampede.

Big Tobacco is such an amazing role model, said Lazarowich, and he’s showing people “what modern Indigenous people look like today. (That) we’re not stuck in the past; that we’re here in the present and we’re going to be here in the future and we’re kicking ass.”

Lazarowich describes audience reaction to Fast Horse as “strange” and “unexpected”. People love the film and are moved by the story of Allison and Cody and the Siksika Nation.

Fast Horse was made in memory of Thomas Many Guns. “We did it in honour of somebody who’s an amazing person who really worked hard to bring Indian Relay to the Blackfoot community in Siksika.

Lazarowich is still coming to terms with her Sundance win. “It’s just very, very surreal,” she said about the experience. “It’s sort of wrapping your head around a new reality that I guess these things do happen, and it’s really exciting.”

It was her fifth attempt to get her work into the prestigious Sundance Film Festival, founded by actor/director Robert Redford.

“When you grow up and you’re Indigenous and you’re from Canada, it feels like dreams like this aren’t even a possibility. Not even something that you can imagine,” she told Jeremy Harpe of CJWE 88.1 FM Calgary.

The Edmonton born and raised Cree filmmaker was introduced to filmmaking “years and years ago” as an actress. She quit acting and moved behind the camera, “and I have loved it ever since.”

There were eight Indigenous films in Sundance this year, “which is amazing”, said Lazarowich, “and all of them are telling unique stories.”

She said it is a wonderful time for Indigenous cinema.

You can watch Fast Horse, a CBC Docs film at https://youtu.be/3gssNjmEz5M