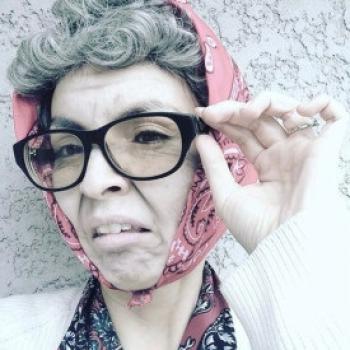 Joyce Delaronde plays character Skinny Kookoo in the ‘Come 'N Get Your Auntie’ comedy show at the Winnipeg Comedy Festival.

“I could always find Indigenous men doing comedy. But not a lot of women. So I'm super excited to be doing something artistic.” —comedian Joyce Delaronde
By Adam Laskaris
Local Journalism Initiative Reporter
Windspeaker.com

The newest production from IndigE-girl Comedy is set to hit the stage at the Winnipeg Comedy Festival this weekend.

“It’s a very comfortable working group and comfortable environment where there's not a lot of pressure,” said Delaronde in an interview with Windspeaker.com. “We're kind of just supportive of each other.”

The show is part of the Winnipeg Comedy Festival, which runs to May 9. Come 'N Get Your Auntie takes the stage at 2 pm Central Time on Saturday, May 7. Tickets are about $25 for both the in-person and livestreamed version of the event.

For Delaronde, she’s excited for the opportunity to get the show underway.

“We all have a different type of humour,” said Delaronde. “We definitely have a variety of Indigenous humour. And a lot of it, some of it is Indigenous and some of it is just general humour.”

Her Skinny Kookoo character has been performed mostly in online videos across various social media platforms.

“My family always asked me why I created this character and I finally realized that this character is more of me, if anything, because growing up for me, there was a lot of racism and I didn't feel like I could actually be Indigenous,” she said. “I had to create Joyce's persona to live in this world. So I feel like I connect a lot with the character as well and really can be more authentic.”

In turn, Delaronde said those same family members have helped inspire the character and the comedy that comes out of it.

“I draw my humour from my family, my cousins, my aunties, my kookoos, my grandmas,” she said. “Because there are many times we would just sit around the kitchen table and just laugh for two hours on end about absolutely nothing whatsoever. We were able to laugh at our own traumas and misfortunes. Like we could take the most unfunny thing and laugh about it.”

Delaronde said she turned to comedy as her kids grew older as a way to explore her creativity.

“I could always find Indigenous men doing comedy. But not a lot of women. So I'm super excited to be doing something artistic,” Delaronde added. “The majority of my life was spent taking care of my children. And now that they're grown, I have an opportunity to do something artistic, which I've never done.”

Delaronde said she’s enjoyed the opportunity to meet the other performers and learn from their work.

“A lot of the funniest stories come from Indigenous women in my family, and it's just their ability to tell a story, to draw it out, to be animated, to laugh,” she said. “So I'm super excited to see more Indigenous women pursuing comedy.”

In particular, Delaronde sees the show as important for Shelby Tobacco, who is travelling to the show from Moose Lake in northern Manitoba. Delaronde herself hails from Duck Bay.

“There's not as many opportunities living in northern and remote communities,” Delaronde said. “I'm also excited because we have a northerner because I've lived in northern Manitoba for most of my life. [The organizers] are willing to also bring Shelby down so it's very inclusive.”

Debbie Courchene, artistic director of IndigE-girl Comedy and owner of Miskoway Productions. “So often, Indigenous identity reaches audiences through the lens of residential schools and colonialism. In this performance, we want to share the joy, laughter and humour that has always been a part of the Indigenous way of life,” she said in a release.

“We created this showcase to break barriers for Indigenous comedians to access and practice their comedy vocabulary,” Courchene added. “By engaging with a range of established, emerging and aspiring comedians, we hope to build a community of support that will encourage Indigenous women and LGBTQA2S to advance their artistic practices in comedy.”

Tickets for the show can be accessed here: https://www.ticketweb.ca/event/indige-girl-comedy-gas-station-arts-centre-tickets/11893065