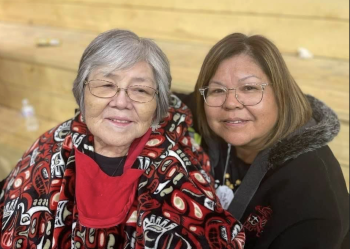 “Our work has really been focused on those situations where costs are really challenging for households and to help address them and to make ends meet.” — Graham Anderson, director of Ecotrust’s Community Energy Initiative
By Rochelle Baker
Local Journalism Initiative Reporter

A remote coastal First Nation has weaned a third of its homes off fossil fuels, making climate gains communities in the rest of B.C. can only aspire to.

To further its clean energy transition, Heiltsuk Nation has lined up another $5 million in funding to provide an additional 250 homes in Bella Bella with energy-efficient heat pumps over the next year. Once they are in, 90 per cent of the community’s households will have dramatically reduced their carbon footprint.

“Some of our community members didn't even have any heat, so being able to address that gap, especially for our elders, is huge.”

The heat pumps, which run on hydroelectricity and filter out pollutants, are already driving down energy consumption, emissions and bills while improving the air quality and health in the community’s homes, Humchitt said.

The heat pump project aims to provide the Haíɫzaqv with healthy homes and hearths and tackle energy poverty as part of the community’s new clean energy plan.

The nation developed its blueprint for action — titled Protecting our World, or H̓íkila qṇts n̓ála’áx̌v — and the heat pump project is a core initiative.

The first 154 households have already had diesel furnaces or other inadequate heating systems replaced with central air-source heat pumps as a result of a partnership with Ecotrust Canada, which got underway in 2018, Humchitt said.

The Heiltsuk are ahead of the curve in a province where only 10 per cent of B.C. homes rely on heat pumps — which are much more environmentally friendly than natural gas, other fossil fuels, and other electric heating systems.

Despite the fact heat pumps heat and cool a home while generating the least emissions, the number of households heating with natural gas has gone up four per cent since 2017, according to a BC Hydro report.

More than half the homes in the province rely on natural gas, and in single-family dwellings, that number rises to two-thirds.

But in Bella Bella, many homes rely on dirty diesel to heat their homes, which is shipped to the remote community and poses an additional environmental hazard should a spill occur.

Of the 1.9 million litres of fossil fuel used by the community per year, 54 per cent was to heat homes, according to the Haíɫzaqv community energy plan.

Switching just one home from an oil furnace to a heat pump eliminates five tonnes of greenhouse gas (GHG) emissions annually. So overall, the new heat pumps in the community mean 770 tonnes of GHG are abated each year.

And typically, heat and electricity bills in Bella Bella homes — which often house multigenerational families — are high, averaging $3,600 annually. But by switching to heat pumps, average household energy spending dropped by $1,500 per year.

An early analysis of the community’s energy use showed Bella Bella homes are consuming double the provincial average, Humchitt said, largely because many residences built and neglected under colonial policy are energy inefficient, overcrowded and inadequate for the climate.

An important step to compound gains from the heat pump project will be to continue to do energy audits of individual homes to determine what kind of retrofits, shallow or deep, they need, she said.

“We have to do the work now to make sure we know which homes require the most work.”

The Haíɫzaqv climate action team and tribal housing department will continue to work with Ecotrust — a charity that partners with rural, remote Indigenous communities to tackle energy poverty — on the community’s retrofit plans and train local energy advisers, she said.

The success of the heat pump project in Bella Bella mirrors that of a Skidegate Band Council initiative in 2016 that saw nearly all the Haida Gwaii community’s 350 homes outfitted with the energy-efficient system, said Graham Anderson, director of Ecotrust’s Community Energy Initiative.

Heat pumps are proving to be one of the most effective and least complex ways to lower heating bills for households facing high energy costs in B.C., he said.

“They're both communities facing exorbitantly high household heating costs,” Anderson said. “Our work has really been focused on those situations where costs are really challenging for households and to help address them and to make ends meet.”

Rural, remote, and Indigenous communities often face energy costs that are up to three times the Canadian household average, according to an Ecotrust report.

Energy poverty is generally understood to be when a low-income household is spending double or more than a median household for necessities such as heating, lighting or cooking.

Energy poverty disproportionately impacts rural communities and the health and wellness of families, increasing the risks of asthma or mold-related illness caused by living in cold, poorly ventilated homes, the report stated.

One recipient of a heat pump told the Heiltsuk climate action team that she no longer had to struggle with the choice between food or heat for her family.

One factor in the success of the Haíɫzaqv heat pump project has been clarity of vision and sustained commitment by the climate action team and leadership, Anderson said.

“They’re leading the way on the community energy plan and aligning their work with the community’s vision and intentions and pursuing that project over many years.”