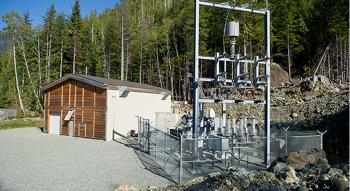 The switchyard and powerhouse at the award-winning hydropower project Canoe Creek Hydro, owned by the Tla-o-qui-aht First Nation, one of 14 Nuu-chah-nulth Nations.

“During this time of a worldwide pandemic you would think now more than ever that you would want to focus on resources that we can provide for ourselves.” — Mariah Charleson, vice-president of the Nuu-chah-nulth Tribal Council
By Julie Chadwick
Local Journalism Initiative Reporter
Windspeaker.com

The Nuu-chah-nulth Tribal Council has sounded the alarm over changes to British Columbia’s Clean Energy Act, which NTC believes could have devastating impacts to ongoing and future clean energy projects.

At issue are proposed amendments contained within Bill 17, introduced at the end of June, that will potentially put First Nations independent power operations like Nuu-chah-nulth Nations’ run-of-river and solar projects in peril.

If the amendments go through, the energy self-sufficiency of Nuu-chah-nulth’s remote and isolated communities could be endangered, because B.C. Hydro, via its subsidiary Powerex, would no longer be required to buy locally from B.C.-based projects and could instead buy from outside the province.

“An amendment to the Clean Energy Act of this stature would discontinue purchasing clean energy from independent power producers, which usually benefits our rural and remote communities,” said Mariah Charleson, vice-president of the tribal council. NTC represents 14 First Nations in three regions along the West Coast of Vancouver Island.

“They're saying that they're going to buy that energy from the U.S. now. So that's huge. And we haven't even been invited to the table any step of the way. There's been zero consultation.”

Thirteen of those 14 nations are either already engaged in the development and production of clean energy or intend to be. Overall, there are more than 120 independent power producers or IPPs in B.C.

The development of renewable energy projects provides revenues from the sale of surplus energy to BC Hydro, but it also means opportunity for First Nations to be energy self-sufficient, crucial for many communities. Over the past couple of decades, roughly $9 billion has been privately invested into solar, wind and run-of river projects that produced clean energy purchased by BC Hydro, said Charleson. A portion of this investment has come directly from First Nations that either own or are partnered in IPPs.

“That was a huge part of the Clean Energy Act… that we could provide our own energy. During this time of a worldwide pandemic you would think now more than ever that you would want to focus on resources that we can provide for ourselves,” Charleson. “So that's another fear and worry is that we're going against that self sufficiency model that was originally created.”

The option of buying clean energy from California is on the table, as it can be purchased at lower rates than what BC Hydro is currently buying it for, said Bruce Ralston, minister of Energy, Mines and Petroleum Resources in an interview with Business in Vancouver at the time Bill 17 was introduced. He declined to comment for this story.

“Eliminating the self-sufficiency requirement gives BC Hydro more options to seek out the most affordable clean energy resources from inside or outside the province,” stated a release from the Energy, Mines and Petroleum Resources office.

However, U.S. IPPs receive a 30 per cent subsidy from the government, which allows their energy to be cheaper, said Laureen Whyte, executive director of Clean Energy B.C., an association of independent energy producers.

“In what industry does government say, 'Oh we'd rather import than grow it ourselves,'” said Whyte.

“Why they would argue that it's better to buy it from California, which has its own set of risks, rather than developing that energy here, with all the economic benefits and taxes and everything else that go along with it? We're baffled. It makes no sense to us at all.”

The exact reasoning behind the decision to amend the act is unclear, but follows a recent governmental trend to roll back advances made in the field of community power production.

Last year, BC Hydro scrapped their Standing Offer Program designed to encourage the development of independent clean or renewable energy projects in B.C. by offering a set purchase price for electricity generated from projects up to 10 megawatts.

Zapped, a government report from 2019 that reviewed BC Hydro's purchase of power from IPPs, concluded that BC Hydro had purchased too much energy from them, paid too much for the energy it bought, and did so at the direction of the province. One of its recommendations? Get rid of the self-sufficiency mandate.

“It's just on all fronts. It's just kind of bizarre to be honest. There are a number of mom and pop IPPs that have been in operation for a long time, and they shut down a bunch of those last year. These aren't big companies. These are just people who live in the community who built their own IPPs,” said Whyte. “So First Nations will definitely be impacted by this.”

Though the ministry states that Bill 17 will not impact existing electricity purchase agreements, Charleson said that does little to address the fears of many of their members. Many of their contracts are coming up for renewal in the coming years. And BC Hydro has already declared force majeure (unforeseeable circumstances that prevents fulfilling a contract) on several IPPs, said Whyte.

“Why weren't we consulted? We're here. We have a law in place through the Declaration on the Rights of Indigenous People that states that we need to align our current laws,” said Charleson, who adds that the Declaration Act requires First Nations free, prior and informed consent regarding anything that impacts their people on traditional lands.

“At the same time they have that, that they're holding in one hand, and in the other hand they're amending an entire law that impacts all of us.”