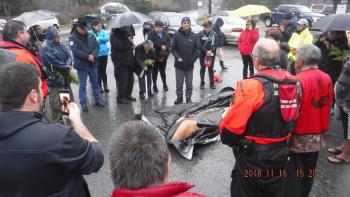 “He came ashore, when he came ashore. He turned into a wolf, and the wolf became a guardian of the wafag house. That’s the importance of the kakawin.” —Ray Williams

On Nov. 14, an young Orca whale was found beached on the West Coast of Vancouver Island in Mowachaht/Muchalaht territory.

Williams, head of the sole family who lives on this historically important territory in British Columbia, immediately contacted the First Nation’s staff to ensure a proper ceremony could be held in honour of the mammal.

(At Yuquot, the stones along the beach are rubbed smooth by the ocean waves, and whales have come to the territory to run their bodies over them. Yuquot is also known as the birthplace of British Columbia, as it’s where Captain James Cook first stepped on North American soil. It is the only place in Canada where there was a Spanish settlement established.)

Killer whales, or kakawin in the language of the Nuu-chah-nulth peoples along the West Coast of Vancouver Island, are considered ancestors.

(Many readers may remember from the early 2000s the life of L98, Luna, or known locally by the Nuu-chah-nulth as Tsu’xiit, including the tensions between DFO, other factions within the Canadian marine establishment and the Mowachaht/Muchulaht peoples. Over many years they fought about removing the whale from Nootka Sound which brought international attention. The Mowachaht-Muchalaht First Nation believed Tsu’xiit embodied former chief Ambrose Maquinna after his death just a few days before the whale appeared.)

On Friday, Nov. 15, Elders, chiefs, and other community members gathered to decide on a proper send off for the spirit of the young whale.

Nearly 60 Mowachaht/Muchalaht First Nation members were on site and performed a ceremony to allow the spirit of the whale to go home.

Tyee Ha’wilth (head hereditary chief) Mike Maquinna (Ambrose’s son) spoke to the cultural importance of the killer whale. Elders spoke about the “wolf of the sea”.

“He came ashore, when he came ashore,” said Williams. “He turned into a wolf, and the wolf became a guardian of the wafag house.  That’s the importance of the kakawin.”

The wolf is extremely spiritually significant to the Nuu-chah-nulth culture, and particularly the hereditary chiefs.

Chief Maquinna expressed his very deep concern about mammals dying in the waters.  He asked DFO to ensure the Nation received a report as to why this killer whale died.

“This is very concerning to our people. We ask DFO to report back to us as to the cause of death of this young whale so that we can understand what is happening in our waters.”

The whale was transported Friday and a necropsy will be performed to determine the cause of death.

The ceremony showed the respect that the Mowachaht/Muchalaht people have for all living creatures. They are the keepers of the land and are the best managers of the resources in their territory, whether they be on land or in the waters, read a statement from the Nation.

Mowachaht/Muchalaht Chief Jerry Jack Jr. blanketed DFO representatives for handling the passing of the young Kakawin appropriately and thanked them on behalf of his late father for learning that orcas are the ancestors of the nation’s great hunters.