Canadians struggling from a sense of shame, from misinformation, and ‘perhaps even a cover-up’—Murray Sinclair 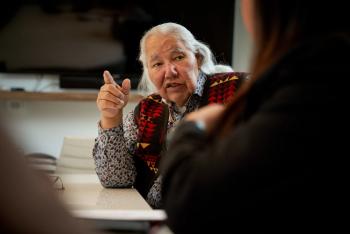 Photo of Murray Sinclair, former chair of the Truth and Reconciliation Commission, is from the 2021 Indigenous Partnership Success Showcase conference website.

Former chair of the Truth and Reconciliation Commission Murray Sinclair provided the keynote address at a virtual business conference which concluded this past Friday.

Sinclair spoke at the 2021 Indigenous Partnership Success Showcase (IPSS), organized by the University of British Columbia’s Sauder School of Business.

Not surprisingly, during a Question and Answer session following his comments on business relationships between Indigenous and non-Indigenous peoples, Sinclair was asked for his thoughts on the recent discovery of the remains of 215 children at the former Kamloops Indian Residential School.

Sinclair said it was a well-known fact that children had died in residential schools across Canada, undisclosed and unidentified, and that there were missing burial sites. Sinclair said Calls to Action 71 to 84 discuss missing children and those burial sites specifically.

Sinclair said there would not be a resolution to the past and an opportunity to move forward between Indigenous and non-Indigenous people, churches and institutions of government unless more facts on missing children became known. These facts must include the number of Indigenous children who died at residential schools and what happened to their bodies.

“There is this growing desire to do something about it,” Sinclair said. “That something needs to be done about this. People need to be held to account. Children need to be taken proper care of. The burial sites need to be properly protected. The children themselves need to be identified.”

Many parents and family members might have to come to terms with a very hard reality; that their children died instead of believing they didn’t come home because they “ran away and decided not to come back to the community and that some day they will come back.”

Sinclair said many in non-Indigenous communities across the country are also struggling now.

“Their struggle is about the sense of shame, the sense of awareness that there has been misinformation, a lack of information and perhaps even a cover-up of all of this,” he said. “We know for example that the documents necessary to keep and make people aware of what occurred to each child who died in the schools are missing in many cases. There are children out there whose bodies, even when located, will be unknown. We won’t know who they are.”

Sinclair said what is known is the fact most of the deaths of Indigenous children occurred in Catholic schools or institutions run by Catholic entities.

“The Catholic Church has so far refused to allow unimpeded access to archives,” he said. “They have the most complete sets of records for the operation of their schools in Canada, better than the government of Canada.”

But he says only a small amount of the information has been shared.

“We have been told that, for some schools, records have been destroyed, accidentally or intentionally pursuant to document destruction policies,” Sinclair said. “The government of Canada has destroyed records. The Catholic Church has lost records, they say.

“The interesting thing is that in some of the entities where we know that children died and were buried in nearby cemeteries, the Catholic school in Canada did not maintain records over the deaths of Indigenous children even though they continued to maintain records over the deaths of non-Indigenous people in those schools, the staff for example.”

Sinclair said the Kamloops discovery is in all likelihood just the tip of the iceberg.

“We need to prepare ourselves for the fact that there are other schools that have equally large numbers too,” he said.

Sinclair also lambasted the public education system in Canada which for many generations taught “a white supremacist history”, one in which everything white people did was good while those who fought Europeans expanding their territorial reach was negative.

The goal of the two-day IPSS event was to provide guidance about how Indigenous communities can work together towards shared success with their non-Indigenous business partners.

Sinclair said long-term relationships are keys to achieving these goals.

“It is about having a basic trust level that has to be reached and it has to be attained and maintained,” he said. “And how do you get to that trust level? How do you begin to feel you can trust them and how do they feel they can trust you? So, showing that you are trustworthy is an important part of what is going to contribute to this success of your partnership.”

Reading statements about residential schools, and particularly about the discovery of the 215 children's bodies discovered at the former Kamloops Indian Residential School, may trigger strong emotions. If you are having difficulties in dealing with these thoughts and feelings and are in need of support, call the Indian Residential School Survivors Society emergency crisis line at 1-866-925-4419. Help is available.