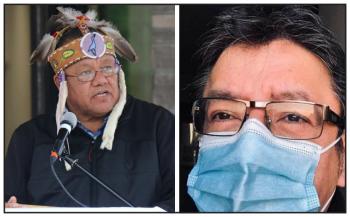 “We said right from the get-go that we wouldn’t leave anybody behind with COVID. Let’s catch up because we are leaving them behind.” — Ontario Regional Chief Glen Hare
By Shari Narine
Local Journalism Initiative Reporter
Windspeaker.com

Five Canadian Rangers on the ground in Bearskin Lake First Nation do not make an appropriate response when local and regional leadership have requested military support, said Ontario Regional Chief Glen Hare of the Assembly of First Nations.

“I’m tired of begging. I don’t always want to have to beg. These are life and death situations up there. So work with us,” said Hare.

Bearskin Lake First Nation, located 425 km north of Sioux Lookout, declared a state of emergency on Dec. 29, 2021. To date, more than half of its population of 460 – including most recently Chief Lefty Kamenawatamin – tested positive with the coronavirus.

In a statement issued today, Kamenawatamin expressed his disappointment with the “minimal” support Canada has provided despite earlier reassurances from Indigenous Services Canada Minister Patty Hajdu that she had heard their request for help and would “make sure that we will continue to be there for the community in the way that they determine is the most helpful.”

“I must now focus my energies and attention on the mental health crisis this situation has created and work towards the positive healing of my community,” said Kamenawatamin.

Rangers arrived on Jan. 8 to assess the situation and help deliver essential services such as food, medicine and firewood.

According to the office of federal emergency preparedness Minister Bill Blair, the Rangers will be in the community until Jan. 23.

Bearskin Lake has been receiving support from neighbouring communities. NAN, the Windigo First Nations Council and other First Nations organizations and communities have continued to provide food, personnel, and vehicle support where possible.

Support has also come from Tania Cameron, the voice of Rock the Indigenous Vote in the 2015 federal election. She asked for permission from the Bearskin Lake First Nation leadership before spearheading her community of Kenora and businesses to donate $28,000 and an additional $25,000 in supplies. Donors also raised $10,000 to cover freight fees to Bearskin Lake. Among the supplies, Cameron managed to obtain a $2,000 log splitter to help with the arduous task of cutting wood to heat the homes on the Nation.

“My goal is to help where I can, especially in a pandemic, especially in a northern remote First Nation where there really is nothing and they’re relying on each other. They're calling on government to help. The people of Canada heard and did what we could to send help,” said Cameron.

Her comments came just hours before Prime Minister Justin Trudeau addressed the public in a federal pandemic briefing this morning.

“Our response is extremely present in Bearskin Lake and we're pleased to see the situation turning the corner and looking like it's getting better, but we will continue to be there in that community and communities around the country as necessary,” said Trudeau.

When pressed to comment on the disappointment voiced by First Nations leadership regarding the limited military support, Trudeau pivoted to talk about the federal government’s response at the beginning of coronavirus entering Canada. He said Ottawa promised a “particular focus and emphasis on supporting Indigenous communities through this difficult pandemic.”

Those are words Hare says he has heard too often.

“Meanwhile the COVID numbers are rising up there. We have to do more. The Prime Minister has to show everybody that he’s walking the talk and not just talking,” said Hare.

This situation and the promises made by Canada to Bearskin Lake First Nation only serve as another example of a long history of dishonesty and neglect from Canadian governments. While reconciliation with Indigenous people has been stated as this government’s priority, it is not yet something Indigenous people are experiencing on the ground, reads a press statement from Bearskin Lake Nation.

Bearskin Lake First Nation is only the lead nation declaring a state of emergency, said Hare. He says he expects that number to rise to 33. Many of those who haven’t declared states of emergency are in various stages of lockdown, suspended inter-community travel, banning outsiders, or are strongly monitoring those coming into their communities.

The same issues that plagued First Nations when the coronavirus pandemic first hit in March 2020 remain, said Hare, such as overcrowded and inadequate homes, lack of accommodations for isolation, lack of clean water, lack of testing, and lack of healthcare personnel and facilities.

At that time, many First Nations brought in extreme measures that cut their communities off from the outside. But since then, people have been educated on the spread of the disease and vaccinations have rolled out.

“We’re trying to rely and trust our people that they are listening. And they are. A great majority of them are,” said Hare, who is leading by example with vaccinations having received his booster shot.

Hare points out that isolation measures have led to mental health issues and an uptick in suicides. He also points to students falling behind because classes are offered online and connectivity is an issue in many First Nation communities.

“I’m asking governments of all colour. We said right from the get-go that we wouldn’t leave anybody behind with COVID. Let’s catch up because we are leaving them behind. I know there’s limited resources, the country’s in deficit, but we ain’t got no choice. Let’s do it. Let’s look at recovery down the road. But right now, let’s protect the lives,” said Hare.