Build a heat shield and construct a land rover? No problem for Whitefish teen 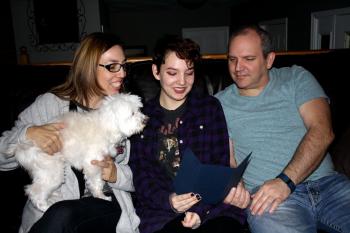 Sara Gardner, 17, reviews her invitation to attend an open house at Laurentian University with her parents Lisa and Andrew.

The shy, petite 17-year-old member of Whitefish River First Nation loves to solve problems, and physics is her game.

Sara Gardner is one of a lucky group of people to be heading this spring to the U.S. Space and Rocket Center Camp Program in Alabama, U.S.A.

Sara and her family couldn’t be more pleased. Her mom Lisa came across the program through her work at Honeywell, which invents and manufactures technologies around energy, safety, and security.

Youth between the ages of 16 and 18 and children of Honeywell employees have the opportunity to be sponsored through the Honeywell Leadership Challenge Academy program.

Lisa thought her daughter would be a great candidate and said, “she’s into science and math. That’s her thing along with physics.”

The space camp was started in 1982 and was the idea of rocket scientist Dr. Wernher von Braun. According to the camp’s website, von Braun “led propulsion activities that launched the Apollo-era manned space program. He envisioned an aggressive schedule for America’s space-bound pioneers.”

He also envisioned an experience for young people who were excited about space.

Sara decided to jump at the chance to attend the space camp and is excited about it. Through this once-in-a-lifetime opportunity, Sara will undergo a variety of astronaut training exercises, engineering challenges, and teambuilding activities, topped off with an extended-duration simulated space mission.

Some of the activities include training like an astronaut on a 1/6th gravity chair and multi-axis trainer, design, build and launch a team rocket, learn teambuilding skills, construct a heat shield and build a rover.

Sara had to answer three essay type questions as part of her application to the camp. The first question asked what the applicant hoped to gain from the space camp program.

In part, Sara answered, “…I’ve always had a fascination for space and this program is a good way for me to learn about it from trained professionals and people who know what they’re talking about rather than just assuming for myself.”

The Grade 12 student at St. Charles College in Sudbury, Ont., has close to perfect grades. Sara has received early acceptance to the Chemical Engineering and Forensics programs at a couple of universities in the province.

Once Sara walks into her chosen post-secondary institution, she’ll be helping to improve the statistics in two areas: First Nation education, and women in math and science. According to Statistics Canada, women are underrepresented in science, technology, engineering, mathematics and computer science (STEM) fields, making up only 22 per cent in the field.

Science seems to be a natural part of Sara. When asked about what drew her to science, she shrugged her shoulders and offered “It’s always kind of been there.”

Sara’s physics teacher, Tim Kingshott, is the Science department head and Senior Physics teacher at St. Charles College. He recognized Sara’s affinity for the science. Kingshott got to know her during the two years he’s been teaching Sara.

Kingshott admires the way her mind works. “Basically, she seems able to not get stressed out. Sara’s able to take problems she gets and compartmentalize them by breaking them down into individual tasks. Then she goes about solving them. She doesn’t worry about the quantity of work that needs to get done,” he said.

Shows like Crime Scene Investigation (C.S.I) have sparked Sara’s interest in the field of forensics, which is where she wants to end up.

In one of her essay answers, Sara said, “I plan to work in a forensic lab as a forensic chemist for either the RCMP or local police force… I’m inspired to use my skills in chemistry to help the police solve crimes and help families of those people get peace.”

A middle child of three children, Sara has always been introspective, with varied interests. Her mother said Sara was also the target of bullies, and because of that, “she spent most of her time at home alone reading books and drawing [anime]… she also started writing short stories as an outlet... She does dream of one day travelling to Tokyo, Japan.”

With her nose to the grindstone and her eyes set on the stars, Sara is heading to Space Camp for a week this spring and travel to Japan is in her future. Employed part-time at a coffee shop, Sara has already started saving for her trip to Japan and has plans to learn the language.