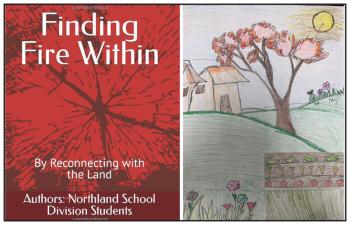 The book Finding Fire Within By Reconnecting with the Land can be purchased on Amazon. (Right) A drawing for the book was done by Jade Paupanekis Robinson and Karma L’Hirondelle of Hillview School.

“That’s the first time I met them (the Elders). It was a nice story. When they moved they had to pack all their stuff and they had to buy a horse and wagon. I thought it must have been hard to be living back then.” — book contributor Steven Big Charles, a Grade 6 student at Hillview School
By Crystal St.Pierre
Local Journalism Initiative Reporter
Windspeaker.com

Students in the Northland School Division (NSD) in Alberta were given a unique opportunity to participate in the creation of a book titled Finding Fire Within By Reconnecting with the Land.

The book was a collaboration of the entire school division, including students from Kindergarten to Grade 12. The division is in treaties six and eight territories. It covers 288,347 sq-km of land, which includes various landscapes, with mountains, lakes, rivers, forests and wetlands.

The various schools within the area are located within municipalities, First Nations and Métis regions and settlements. About 95 per cent of the student population is Indigenous.

The project is derived from a partnership between Cenovus Energy and NSD to create opportunities for students to reconnect to their heritage. Cenovus provided the funding for the project while NSD created the outline for it.

“I think that really what we wanted to do is help students connect to their culture and connect with the Elders so that they could gain some of that wisdom and shared experience with the Elders in the community,” said Karen Davies, principal at Elizabeth School in the 2021-2022 school year. “Also, we wanted them to have purpose in their writing. This was a project that they were really excited about because, in the end, they knew they were going to be telling important stories in their own words and that they were going to be published in a book and so they were very excited about that.”

“Each school had a little bit of leeway. We didn’t really put parameters… basically what we wanted to do is work with the Elders,” she said.

“We interviewed them, talked to them, worked with them to learn about their lives and their stories. And then the students rewrote their stories in their own words and illustrated, drew pictures or colored pictures of the stories as well, and then we were able to publish it.”

Steven Big Charles, a Grade 6 student at Hillview School, said last year when he was in Grade 5 he contributed to the book and he really enjoyed hearing the Elders’ stories.

Elders George and Dorothy Bellerose spoke to his class and told them about their journey moving across provinces, starting a new life in northern Alberta and how different life was without the technology of today.

Big Charles was one of the students who drew a picture that accommodated the class story.

“I drew some pictures. The one with the four teams of horses when they just moved to East Prairie,” Big Charles said, adding he loves to draw when he can and his favorite thing to draw is birds.

“That’s the first time I met them (the Elders). It was a nice story. When they moved they had to pack all their stuff and they had to buy a horse and wagon. I thought it must have been hard to be living back then.”

Another student that contributed to the class story was Karma L'Hirondelle, who is the grandchild of the Belleroses.

She explained she was to listen to their stories and her job would then be to go back to her classmates and tell them the stories she had heard. The class would then rewrite the story in their own words.

At many schools, the project was a part of the curriculum for some grades, but at others it was sent out to the student body for anyone who was interested to participate.

“We wanted people to ignite that fire within themselves about their culture, get excited about their culture, and the traditional ways of (Indigenous peoples) and kind of where they came from. Looking at the path and making those connections to the future,” said Davies.

Each of the Elders, and those who were included in contributing to the book, received a copy of it when they returned to school this year.

Davies said NSD has received a lot of positive feedback about the book and sales on Amazon.ca have really taken off. The book can be purchased here.

“It’s important that kids have an audience, so it’s really great that we were able to produce something like this so that they can see their work and other people can read it,” she said.