Book on Métis in St. Paul may disturb people, but now is a time of soul-searching, says researcher 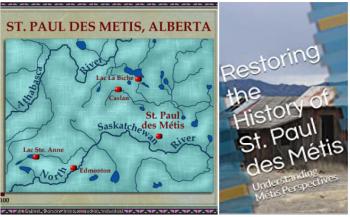 “History never ever captures the ‘capital T’ truth. It only captures the records of the people who are talking about it and have the privilege in society to talk and have their voices recognized.” — Caleb Anacker
By Shari Narine
Local Journalism Initiative Reporter
Windspeaker.com

Roy Missal is hopeful that a research project undertaken by a handful of Métis and settlers in St. Paul will raise awareness of the Métis’ role and proud history in that northeastern Alberta community.

“I remember my mom and relatives talking about the Métis and how rich their culture was, (but) not really saying a whole lot of it, not being overly proud of it in the sense that we didn’t really show it. It was hidden in the woodwork,” said Missal, who, at close to 70 years old has lived almost his entire life in St. Paul.

As Missal and five others moved forward in recording Métis history in the community, Missal soon found out that his personal experience was not unique.

“Initially in these circle meetings, a lot of people, they felt apprehensive about sharing some of their really heartfelt beliefs. As time went on (Métis) people felt more and more relaxed and they started saying what they really felt instead of what they were told not to say,” said Missal.

“It's about not feeling whole, wondering why we don't feel whole. I think that goes for anyone who's been colonized or the results of that.”

Missal doesn’t hesitate to draw on the adage that history is written by the victors.

“If history is written by the colonist, the person carrying the big club, it's the dominating factor. It doesn't mean it's 100 per cent right,” he said.

“History never ever captures the ‘capital T’ truth. It only captures the records of the people who are talking about it and have the privilege in society to talk and have their voices recognized,” said settler Caleb Anacker, who moved to St. Paul in 2011.

Anacker was drawn to questioning the history of his new community after taking social work practicum courses at Blue Quills University and listening to the now-late Vincent Steinhauer, then-president of the university. The Blue Quills building is a former federally-sponsored Catholic church-operated residential school.

Anacker also observed “unspoken” racial tension in the community between the non-Indigenous and Indigenous populations.

“They worked very hard and they created a very successful town and then there’s the unspoken part, what had to happen to do that, segregating the Métis, pushing many Métis to the point if you could pass for white you did, if you could pass for French, you did, and you never ever talked about your Indigenous heritage.”

Through the St. Paul Community Learning Association, the small group accessed an anti-racism community grant offered by Alberta Culture and Tourism in 2018. The result of their speaking circles and research was a book entitled “Restoring the History of St. Paul des Métis: Understanding Métis Perspectives”.

The opening chapter states, “Our first motivation was to have a better understanding – a better relationship with – the lived experiences of our local history and continuing effects on racial tensions. As we sought better relationships, we wanted to be transparent, to listen to each other, and to promote reconciliation with Métis neighbours.”

The book may shock and anger some people, admits Missal, but that isn’t the intent of the group. The goal of the book is to tell Métis history, put it in context, and educate settlers.

“The best way I can explain it for St. Paul history, my mom used to say, ‘Roy, go clean up your room.’ I used to go sweep everything under the rug. Five months later my mom came into my room and said, ‘What are those lumps under the rug?’ That’s what’s happening in history. People are wondering what the lumps are under the rugs, what’s the hidden stuff that’s never talked about,” said Missal.

The book includes 31 far-reaching “practical recommendations for change” that came from the Métis participants in the project. These recommendations are aimed to “poke other people who have connections to local government, school, whatever,” said Anacker, to see what they can do to improve relations.

Some of those sector-crossing recommendations include institutions, organizations and agencies facilitating the exchange of stories between Métis and French descendants; modifying municipal signage to highlight Métis origins; and to fund and support the revitalization of Indigenous languages, particularly Michif, in schools.

Anacker says copies of the book have been sent to the Indigenous relations departments of various levels of government. He adds the hope is to hold town hall-type question-and-answer meetings in a variety of settings when coronavirus pandemic control measures are lifted.

Anacker Is hopeful that the recent nation-wide focus on systemic racism won’t make people defensive and turn them off from reading the book.

“I think we’re living in a time where people are doing a lot of soul searching,” he said.

“Restoring the History of St. Paul des Métis: Understanding Métis Perspectives” can be purchased through Amazon.ca.