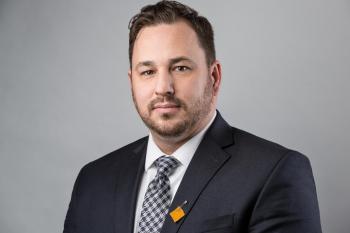 Jeff Cyr, the CEO of the Raven Indigenous Impact Foundation

“Indigenous peoples are experiencing an epidemiologic transition with above-average prevalence rates of diabetes and its risk factors. In Canada the rates of diabetes in First Nations are up to three times the national average.” — Kirza Buch Kristensen, senior advisor for the World Diabetes Foundation
By Sam Laskaris
Local Journalism Initiative Reporter
Windspeaker.com

A bit of history has been made as the World Diabetes Foundation (WDF) for the first time has given some financial support to a Canadian project.

The WDF traditionally funds projects in low- and middle-income countries, but it has agreed to provide a $500,000 (US) grant to the Vancouver-based Raven Indigenous Impact Foundation (RIIF). These funds will assist with RIIF’s Indigenous-led and creative social finance model geared at reducing diabetes.

Jeff Cyr, the CEO of the RIIF, said he joined various colleagues at a Novo Nordisk Foundation conference held in Denmark in late 2019. Novo Nordisk, a pharmaceutical company, is the world’s largest producer of insulin.

“While we were there the WDF invited us to give them a proposal,” Cyr said.

WDF officials were sufficiently impressed to offer up the grant money.

With its WDF funding, the RIIF will establish a pilot Diabetes Reduction Bond and Community-Driven Outcomes Contract to finance diabetes prevention interventions.

The goal is to prevent or reduce Type 2 diabetes in six Indigenous communities, four in Manitoba and two in Prince Edward Island.

The bond is created using the WDF funds as upfront capital to raise $22 million needed to operate the project in the six communities, Cyr explained. A contract is necessary to guarantee invested funds are spent in the ways they are intended to be used.

Cyr believes the concept has the potential to spread, not only throughout Canada but globally as well.

“This is such a better way to do things,” he said.

Cyr believes all parties will benefit in the long run with this social finance model. By directly bringing in much needed funds into the pilot project communities, there will be improved wellbeing for Indigenous people in those locations.

The communities taking part in the pilot project are each expected to establish a healthy hub, an area where community members can gather and access healthy food as well as advice from life coaches. These life coaches will be trained individuals from the community who will be offering support on healthy behaviour changes.

Also, community members will be encouraged to take part in various physical activities and sports. And through the use of technology and various apps, they'll not only be able to keep track of their own progress but life coaches and health care officials can also monitor that progress.

And by being healthier, Indigenous people can be more active in social enterprises while providing much needed savings to the health care system.

Cyr said it made sense for the WDF to fund this project.

“I think they realized we’re not moving (forward) in any way against diabetes around the world,” he said. “In fact, we’re going backwards.”

“The cost of the health care system is enormous,” he said. “It would blow your mind.”

Though it’s a pilot project for now, Cyr said several officials have been in touch with RIIF in the hopes the venture will be expanded.

“We’ve had interest from other Indigenous communities from across Canada,” he said, adding those communities are in British Columbia, Alberta and Manitoba.

Kirza Buch Kristensen, a senior advisor for the WDF, who is based in Copenhagen, said it is only fitting a Canadian project is being funded now in honour of the 100th year celebration of insulin being discovered here in the country.

“The discovery of insulin was made by researchers in Canada and WDF has been exploring different options for suitable projects to contribute to the centennial celebrations,” she said.

“The support to the Indigenous Diabetes Reduction Bond offers WDF an opportunity to give back to Canada, the home of the researchers who discovered insulin and shared their knowledge with the world.”

“WDF has a keen interest in piloting new funding models for the reduction of diabetes,” she said. “The social impact model to be deployed in this initiative will engage both philanthropic foundations, government entities and private investors in a blended finance model. WDF views this as a promising explorative approach that could potentially be scaled up, reproduced in similar contexts at a later stage.”

Buch Kristensen also said it was important for the WDF to not only recognize Canadians during insulin’s centennial celebrations but also to help out Indigenous people in the country.

“Indigenous peoples are experiencing an epidemiologic transition with above-average prevalence rates of diabetes and its risk factors,” she said. “In Canada the rates of diabetes in First Nations are up to three times the national average.”

Buch Kristensen also said Indigenous people tend to not have the same health access as others, not only in Canada but in other parts of the world as well. She felt some reasons for this were discrimination and social burdens and the fact Indigenous people might live remotely, limiting their health care access.

Though this is the first time the WDF has financially supported a Canadian project, it is not the first time it has assisted ventures involving Indigenous people.