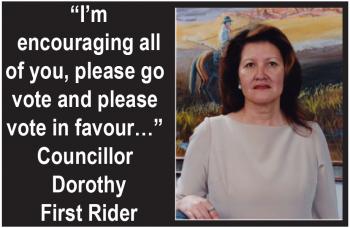 Update: Blood Tribe members voted to ratify the settlement. There were 3,015 ballots cast, with 2,966 in favour of ratification and 49 against.
By Shari Narine
Windspeaker.com Contributor

Nineteen years after the specific claims process began, Blood Tribe members will be going to the polls on March 11 to ratify the largest settlement ever negotiated by the southern Alberta First Nation.

The Mismanagement of Assets claim is worth $150 million to the tribe, and includes an initial $2,000 cash pay-out per member.

This is the first settlement that has allowed the Blood Tribe to distribute funds to its members, said Councillor Dorothy First Rider.

As the decision is for a large sum of money, the federal government is requiring a 25 per cent turn out for the vote, she added.

For the settlement to be approved, 50 per cent plus one of votes cast need to be in favour. Blood Tribe members 21 years and older are eligible to mark ballots.

First Rider is confident the turnout will be there.

“Our membership has always supported our previous ratification votes and we have done extensive on-reserve and off-reserve consultation and information sessions. And we also did a massive mail out to our off-reserve residents who did not live in the nearby area … even for the ones who reside in the (United) States,” she said.

First Rider says although past ratification votes required simple majorities, she believes that more than 25 per cent of the voting membership did mark ballots.

People were hired to go door-to-door on the reserve to explain the assets claim and settlement.

The crux of the Mismanagement of Assets claim dates back to 1882 when the government made the treaty promise to provide cattle (assets) to the Blood Tribe in order to establish an alternative economy as buffalo were disappearing. That promise was never fully met.

The Blood Tribe did not get the numbers of cattle promised by Indian Affairs; they received the cattle years after they were first ready to accept them; and Indian Affairs then took over management of the cattle, starving the cattle by abusing pasture land or leasing land out to non-Blood members.

According to papers filed with the Special Claims Tribunal in 2012, the Mismanagement of Assets claim states that “damages suffered by the Blood Tribe and individual members were significant” including the loss of 125 years of income and progeny from the original herd and starvation by members due to loss of an alternate food source.

The dollar figure of $150 million was established through determining the price of cattle in the late 1800s and what those cattle would be worth today.

Members had three months to respond to a survey setting the priorities for how the settlement money will be spent. The money must be used for capital projects and not programs or services, said First Rider.

Other smaller projects will include enhancing the Red Crow park and rodeo ground. Funds will also be used to cover the loan funding received to research the claim, legal fees and ratification.

“There’s something in there to go towards everybody’s interests on the reserve,” said First Rider.

She also points out that interest earned on the trust agreement funds will be paid out annually to each member. That amount will decrease each year as more capital projects go ahead.

The capital projects will be tackled over the next 10 years, although council has given itself 20 years to complete all construction.

Even though chief and council will change over the time-span for completion of the capital projects, First Rider says the priorities won’t change as they are tied to the settlement agreement.

First Rider says she knows there have been some disgruntled members from previous settlement agreements, but says that the money has been used or will be used as allotted.

Money for the two Akers settlements (totalling nearly $6 million) was used to purchase more than 600 acres of replacement land that was originally reserve lands. Money remaining in that fund will purchase an additional 11.7 acres.

The Bombing and Gunnery Range settlement of just under $6 million was targeted for two capital projects. Construction of the new Public Works building, at a price tag of $4.5 million, will get underway this fiscal year.  A balance of $1.2 million remains in that trust account and will be used to construct an Elders ceremonial building.

“There are always members that will question whether the money was used for that. Whatever their motives are, I don’t know,” said First Rider.

For the results of the vote to be accepted, 1,879 of the Blood Tribe’s 7,515 voting members must cast ballots. For the agreement to be ratified, 949 must vote in favour.

“I’m encouraging all of you, please go vote and please vote in favour of this important vote,” First Rider said in a YouTube address to members.

To help get out the vote, transportation is being provided from Lethbridge as well as from the on-reserve communities of Lavern and Moses Lake.

If the required 25 per cent don’t turn out, but the majority vote in favour of the agreement, a second vote will be held, says First Rider.

“If we do have a second vote and it’s turned down, then the offer is off the table and we lose out on it,” she said.

“The offer will go away and there will be no distribution, there will be no new buildings. Canada will take that offer back and they will offer it to some other First Nation close to settling their claims with Canada.”