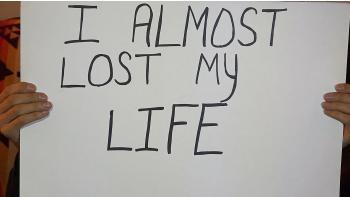 Photo is from one of a series of videos about illegal drug use on the Blood Tribe website http://bloodtribe.org/

“What makes this very unique is that it’s run by paramedics, at 24 hours a day, seven days a week. We think we have a unique model that works well and paramedics follow protocol.” — Kevin Cowan, CEO for the Blood Tribe Department of Health
By Shari Narine
Windspeaker.com Contributor

Kevin Cowan was approached by a mother on the Blood Reserve who told him that one of her daughters had died of a drug overdose. Then she introduced him to her second daughter, who, thanks to new measures implemented on the southern Alberta reserve, had been saved.

“We often see the worst. It was just so nice to see the success. We are pulling people out of addiction,” said Cowan, CEO for the Blood Tribe Department of Health.

This past January, the Blood Tribe opened a safe withdrawal site staffed by paramedics. It was in response to a situation that had become desperate. It was this site that saved that second daughter’s life.

In March 2018, chief and council had declared a state of local emergency on the First Nation because of the high number of overdoses and deaths. The numbers had been skyrocketing since 2014.

Paramedics were responding to calls. Naloxone was being used to save lives. Users were taken to the emergency room. They were treated and streeted. The cycle continued. In 2018, there were 335 calls to deal with overdoses.

Alberta Health Services responded to the Blood Tribe’s request for help by sending a planner to work with local member Rebecca Many Grey Horses. Over the course of eight months, through community consultations and department discussions, they came up with 20 recommendations specific to the Blood Nation.

“People might just spend the night or they might choose to (say), ‘Okay, it’s time to get off (of the drugs).’ At least people are plugged into the system and they can get off of the drug they are on,” said Cowan.

“Not everybody succeeds. They come in and after a week or 10 days they leave and they start using again. But then they may come back to us. And we recognize that’s part of the normal process and it takes a while sometimes for folks to get off, but at least it’s an exit point.”

In December, the Blood Tribe received funding from Alberta Health Services to open the safe withdrawal site with funding for six beds for adult users. When two youths, 14 and 15 years of age, died of overdoses this past February, the Blood Tribe reached out through Jordan’s Principle and secured funds for two youth beds.

The facility has a total of 24 beds and is trying to get more funding to pay for the additional 16 beds. At the site, users receive medical detox help from paramedics (many of whom are members of the Blood Tribe), counselling from Elders and can take part in ceremony and morning smudges.

They are referred to treatment centres and transition services, both of which are available on the Blood Reserve. But once they choose treatment, Cowan says, they are sent to wherever the space is available, which can include places as far north as Fort McMurray.

The majority of those at the safe withdrawal site are Blood members, who are brought by ambulance. However, some people walk in off the street, while others are referred by agencies. There are also people from the other southern First Nations.

“What makes this very unique is that it’s run by paramedics, at 24 hours a day, seven days a week. We think we have a unique model that works well and paramedics follow protocol. They do not utilize physicians’ orders like a nurse. That’s how they respond to an emergency, of course. This is a unique model with paramedic follow-up,” said Cowan.

Overdose figures have been on a downward trend since the site opened. In December 2018 and January 2019, overdoses were 40 each month. Since the site’s been in full operation from February to May, OD figures are 22, 13, 15, and 19, in those months. However, with June only at the midway point, there has been 16 overdoses already, which Cowan attributes to the newest drug of choice: speedballs, a combination of methamphetamine and fentanyl.

Unlike the safe consumption site, the safe withdrawal site has been embraced by Blood members.

In March 2018, when the state of local emergency was declared, the initial response was to set-up a supervised safe consumption site in Stand Off next to the health centre. However, the rural setting of the reserve where transportation was necessary to get to the site, the stigma attached with being a user, and the inability to guarantee anonymity, led to the failure of the safe consumption site.

Paramedics have also been placed at the Moses Lake shelter. An ambulance has been stationed on the south side of the reserve at Moses Lake and at peak calls, an ambulance is stationed at Leverne. Funding from Alberta Health Services has allowed for more ambulances.

“We’re pushing our paramedics hard.  This is not what they signed up for. These guys signed up to work in ambulances and save peoples’ lives and we’ve got them working in a safe withdrawal site,” said Cowan, who credits emergency services director Jacen Abrey, who is also a paramedic, for his progressive approach for using paramedics in a community capacity.

Funding for the safe withdrawal site is in place until January 2021.

Cowan admits he is concerned about keeping the funding—and renewing the funding—under the new UCP government. Earlier this month, Alberta Health announced it would be reviewing the existing supervised drug consumption sites and put on hold plans to open new sites.

“We have numbers in our favour. This appears to be meeting the needs and making a difference. So we want to show to this government, this is something they need to be engaging in,” said Cowan.

He adds that they will be analyzing their figures and services as they go forward to ensure they are meeting the needs of their clientele. He also notes that the program is “tweaked every single day” to make sure it’s successful.

Cowan points to a decrease in petty crime and trips to emergency as more indicators to the impact of the safe withdrawal site.

“We’re doing what we have to do to help people,” he said.