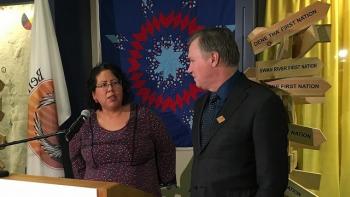 “They helped me get to places and they helped me not to be scared and to keep going and don’t give up,” said Sheena Bonaise.

She arrived in Edmonton from Maskwacis two-and-a-half years ago with her two daughters. She connected with “New in Town”, a program that has been offered through Bent Arrow since initial funding in 2012.

“I’m very grateful that they have helped me along the way. They were just there for me. I appreciate their help.”

On Feb. 3, Indigenous Relations Minister Richard Feehan announced that Bent Arrow would receive $75,000 for the “New in Town Aboriginal Welcome Service”, which works with Indigenous newcomers to Edmonton who are vulnerable.

The minister praised Bent Arrow for picking up on that need and delivering the necessary supports.

Bent Arrow partners with four other organizations to offer the support and services needed for new Indigenous arrivals. Client support ranges from days to years, she said.

Bent Arrow realized such a program was needed when people arriving in the city stopped in to ask for a bus ticket, said Whiskeyjack.

“They came in to get a bus ticket … but they didn’t just need a bus ticket. They needed to go get food. They were looking for shelter … There was all kinds of reasons. Never was it just a bus ticket,” she said.

Instead of just directing newcomers to the services they needed, Bent Arrow decided to be deliberate in offering support.

Trips to First Nation communities helped put supports in place prior to people leaving the reserves and coming to Edmonton for jobs or post-secondary education.

Edmonton is home to 70,000 Aboriginal people, which represents the second highest urban Aboriginal population in the country. Winnipeg leads the way.

The funding from the Alberta government was provided through Alberta Indigenous Relations’ Urban Initiative Program, which supports projects that remove barriers and strengthens economic and social opportunities for urban Indigenous people in the province.