Beading obsidian brings on the future 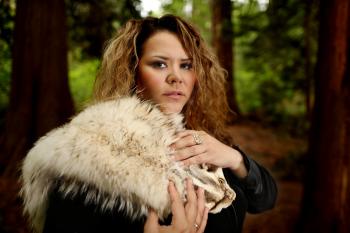 “I feel my work is my legacy, and nobody's promised another day. This collection is my life's work up to this point.” — Sho Sho Belelige Esquiro on the exhibit “Doctrine of Discovery”
By Odette Auger
Local Journalism Initiative Reporter
Windspeaker.com

“Doctrine of Discovery” is Kaska-Dene artist Sho Sho Belelige Esquiro’s first solo exhibit. It is meant to honour Indigenous strength while confronting and addressing the legacy of colonial atrocities.

In the multimedia exhibit, Esquiro’s art weaves together honour and prayer with themes of genocidal colonial practices, theft of resources and the murder of Indigenous women and children.

“These are things that have affected myself and my family from these policies that are upheld within Canada.”

“Doctrine of Discovery” premieres at the Bill Reid Gallery of Northwest Coast Art from Sept. 22 and runs until June 5, 2022.

Esquiro has been crafting couture that celebrates connection to land, family and Indigenous community for 11 years. She works with a wide range of materials, including recycled and ethically sourced wool, fur, leather, and minerals. The result is an exhibit rich in paintings, photography, textiles and couture gowns.

Esquiro is from Tulidlini, where two rivers meet, also known as Ross River, Yukon. It’s a beautiful and grounding place for her, from which she has drawn peace and energy.

Many of her materials come from her lands: fox pelt, beaver tail, and shells. A fur from her Uncle Amos appears in her art.

“He’s our national treasure. He’s 95 and he still traps. He’s in the hospital with COVID-19 right now, so we’re calling for prayers.”

Although some techniques and materials are rooted in her heritage, Esquiro doesn’t call those materials “traditional.”

Esquiro has had family and community support, mentors, and she keeps them close to her heart as her audience. She shares ideas and plans with family. She provides as an example, her dad. She talks with him as a residential school survivor, listening to learn if an idea she has will be too triggering. With themes of genocide and resource theft core to her art, it was important that Indigenous people as viewers were considered, first and foremost, she says.

The show at Bill Reid Gallery will attract school tours, tourists and people who are new to this country.

“I'm hoping that people come and all colours, creeds, religions can really take something away, or it brings something up in them to keep these conversations going.

“It's for a non-Indigenous person to come in and get a glimpse. This is not historical, like ‘forget about it. Get over it already.’ No. This is still happening.”

Miranda Belarde-Lewis is a Zuni-Tlingit assistant professor at the University of Washington and curator of this exhibit. She says the show’s intent is to craft conversation starters, although she’s a big fan of unintended conversation.

This show was five years in the making, growing and shifting during pauses brought on by gallery renovations, pandemic, cancer and loss.

The foundation originated with Layers of Love: The Wearable Arts, a show with “amazing, trail-blazing artist Clarissa Rizal. It was like working with a rock star,” says Esquiro. Rizal had cancer and she passed just after the original show was meant to open at the Bill Reid Gallery in October 2016. “It was heartbreaking, just heartbreaking.”

The Bill Reid Gallery closed for renovations afterward, and that was followed by the pandemic restrictions.

“This show has had every possible hurdle,” says Belarde-Lewis.

The pauses allowed time and space for themes to crystallize, themes that included murdered and missing Indigenous women and men, residential schools and resource theft.

The timing now feels like confirmation to Esquiro to use her special gift to continue awareness building, as the painful recoveries from unmarked, undisclosed graves at former residential schools continue.

Esquiro prayed long and hard over how to create from these themes, she says. The healing process is woven into the show’s pieces, and for Esquiro, art and spirituality are one thing.

Similar to people bringing signage to protests, Esquiro has incorporated text in her recent work. One piece uses an infamous quote by an originator of Native American boarding schools in the United States, Richard Pratt.

“It’s been emotional. I mean, who wants to bead that quote? But it’s also been healing.”

Esquiro is concerned about the fading attention to the thousands of children’s graves recovered at residential schools. What happened to the uproar, she asks, when the first 215 children were recovered in Kamloops? It’s a conversation her show aims to continue. She is the first generation in her family to not be forced into residential schools.

“Sho Sho is capturing this widespread feeling of Indigenous peoples across the Americas through her fashion, which is such a unique viewpoint and unique expression that lures you in,” says Belarde-Lewis. “It's like a fish hook. You know, you see these shiny beads and you see the furs.”

The audience is drawn in, close, the materials are so tactile, she says. Memories and current events begin to rise, and conversations emerge.

“The last time Pope Francis refused to apologize, I saw so many people in my community so hurt,” says Esquiro. “It brought it all back for them. I just cried. It broke my heart. All the other churches apologized.”

Esquiro was invited to a fashion show in Paris, and she took her pieces NO APOLOGY NECESSARY, including a jacket with an image of Pope Francis placed on it upside down to express distress like inverted flags do. She took it to Notre Dame, one of the most famous symbols of Catholicism in the world.

“It would be amazing to get an apology,” said Esquiro, “but if we don’t get it, our healing isn’t going to be dependent on it. So that’s what I meant by no apology necessary.”

“Sho Sho’s not waiting for people to come to her so she can give them a piece of her mind,” says Belarde-Lewis.

After the Notre Dame event “I was referred to as an activist and I've never called myself that. So it was uncomfortable at first, because I'm not on the front line at all by any means,” says Esquiro. “And this collection is really honoring people that are on the front lines.”

Protest Kokum is a piece created in tribute to the power in grassroots activism, communicated through leather, text, font and beadwork.

Curator Belarde-Lewis describes another piece, a child’s dress, to honour children who had to go to residential school. They got stolen from their families, from their land.

She considers the generations of women who crafted regalia for their loved ones with keen attention to detail. Not all had the privilege of owning regalia, or having Elders to learn from.

Through systematic oppression, connections to family and land were deliberately removed, Belarde-Lewis says. In describing the meticulous beadwork, her mind turns to the seven generations, and she passes along a teaching she received.

“We're always talking about the seven generations, whether that’s us being in the middle of seven generations, or we're planning for seven generations from now. We've endured 500 years of intense colonial oppression and we're still doing our thing. It's not going to be what it was 500 years ago. And that's okay. We can't romanticize the future as if it is something 500 years in the future.  That veil between us and what the future is is thin. It really is just a veil. That future is just on the other side of that veil.”

Esquiro takes her opportunity to use her voice seriously and passionately. She’s only 41, and to be offered a solo show is a tribute. She’s working day and night to ensure the best of her skill and talent are in this show, she says.

“I’m honoured to have this platform and talk about these issues that are important to myself, and in Indian country.  I feel my work is my legacy, and nobody's promised another day. This collection is my life's work up to this point.”

“I believe Creator blesses you with a gift, and I feel like it's your responsibility to utilize that gift and to share that gift, and then make space for other people with your gift. Not just let it stop at you.”