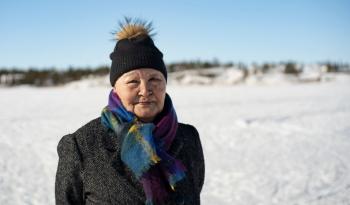 “That’s all I ever do, my whole life. And I’m still at it, still improving.” — Germaine Arnaktauyok
By Adam Laskaris
Local Journalism Initiative Reporter
Windspeaker.com

For most artists, there’s rarely a chance that someone will stumble upon their work without realizing they have a copy of it, and then trade it for something else days later without giving it a second thought.

But for Germaine Arnaktauyok, it’s something that has happened with her work countless times.

Arnaktauyok was commissioned by the Royal Canadian Mint in 1999 to design a special two-dollar, mass circulated coin to commemorate the establishment of Nunavut at a territory.

Arnaktauyok’s Toonie showcases an image of a Inuk drummer. Her design replaced the traditional polar bear image on two-dollar coins produced in Canada in 1999.

Arnaktauyok’s work was her first in her relationship with the Royal Canadian Mint. She has since designed multiple commemorative coins, though mostly for collector sets.

Born in 1946 in the Igloolik region of the former Northwest Territories (now Nunavut), Arnaktauyok has worked in a variety of different mediums throughout her art career — lithograph, drawing and painting — often to convey messages of women’s roles in Inuit culture.

“That’s all I ever do, my whole life,” Arnaktauyok said. “And I’m still at it, still improving.”

Named as one of the 2021 recipients of the Governor General’s Award for Visual and Media Arts presented by Canada Council for the Arts, Arnaktauyok was flattered by the recognition of her life’s work.

“I was very surprised. It was pretty nice, very nice,” she said. “I’ve been working on my artwork for many, many, years. You really have to be drawn to doing your creative artwork at a young age and just keep going.”

Much of her work is tailored to understanding traditional teachings in Inuit culture, but she was robbed of the opportunity to learn it during her childhood after being installed in a residential school at Chesterfield Inlet.

“Because I was in residential school for seven years I really didn’t know about stories, myths, and legends,” Arnaktauyok said, noting that she was curious to learn more about her own culture.

“In my 20s, I started going back and reading about Inuit life as far back as I can,” she said, with a particular focus on the history and colonization of Baffin Island.

Currently living in Yellowknife, Arnaktauyok’s life has seen her travel throughout Canada, studying in Churchill, Man., at the University of Manitoba, and at Ottawa’s Algonquin College.

Arnaktauyok’s work has been showcased throughout the Canadian North, as well as in galleries in the south, including Ottawa’s National Gallery of Canada. Worldwide, her work has been seen in London’s British Museum, as well as in American collections at Massachusetts' Peabody Essex Museum, the University of Michigan Museum of Art, and the Pennsylvania Academy of the Fine Arts.

In 2015, Arnaktauyok produced the memoir My name is Arnaktauyok: The Life and Art of Germaine Arnaktauyok, co-written with Gyu Oh and published by Inhabit Media. The book features more than 100 reproductions of her art and her own commentary on each piece.

“He’s the one who pushed me into artwork more,” she said. “It helps to have somebody to look out for you.”

Arnaktauyok pushes the importance of education for young artists who are interested in following in her footsteps.

“Go to school. Take more artwork,” Arnaktauyok said. “That’s the only you can help. School is boring, but somebody will teach you. And soon you will get your own style. It doesn’t take a few years. It takes a long time for you to get comfortable.”