Artist explores the future of Indigenous people through machinima 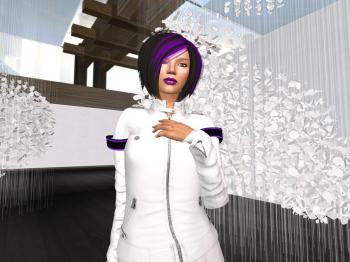 A nine-part machinima story of Indigenous peoples in the future is the subject of TimeTraveller™ .

It’s an important story to tell, said Richelle Bear Hat, who looks at the exhibit through three lenses: she is of Blackfoot and Cree heritage; she is an artist; and she is engagement coordinator at Truck Contemporary Art Gallery in Calgary, which is hosting the exhibition.

“With Skawennati’s video work, she’s making this narrative, these stories thinking about Indigenous peoples in the future. How is that going to look? She’s a very big advocate that we need to start having that viewpoint,” said Bear Hat.

“Our lack of presence in the depictions of things to come concerns me,” writes Skawennati in her artist’s statement. “As a Mohawk woman, I believe that we need to visualize ourselves as full participants in the future in order to assume our appropriate role as active agents in the shaping of new mediums and new societies.”

It’s a concept Bear Hat embraces and she’s quick to point out that there’s “no right answer” as to what the future will look like for Indigenous peoples.

“But to start to have these video works that she’s made to start those conversations, I think it’s really exciting,” she said, adding that it’s important to move away from viewing Indigenous peoples as only a “past kind of people.”

But that’s an easy trap to fall into, she admits.

“There are so many images and stories and when you think of Blackfoot culture, Cree culture, Indigenous, you think of history, you think of black and white photos, very much like 2-D representation,” said Bear Hat.

But TimeTraveller™ challenges that perception, not only in how the story is told, but what that story is. It is about Hunter, an angry young Mohawk man living in the 22nd century. Despite his impressive range of traditional skills, he is unable to find his way in an overcrowded, hyperconsumerist, technologized world.

He uses his edutainment system, his TimeTraveller™, to learn about his heritage. Through a bizarre glitch in the system, he meets Karahkwenhawi, a young Mohawk woman from our present. Together they criss-cross time, and end up discovering the complexity of history, truth, and love.

Skawennati is an artist from Montreal and born in Kahnawake Mohawk Territory. She tells her story through machinima, a gaming technology, something similar to the edutainment system used by her creation, Hunter.

Bear Hat is excited about how Skawennati presents her work

“With all these types of technology that’s coming into play now, people have more access to tell their stories and to express that. And I think that’s really powerful in Skawennati’s work. People can look at themselves as producers and not just consumers of other people telling their story,” she said.

“There are so many more platforms to share perspective and stories,” she said.

TimeTraveller™ consists of nine episodes totalling 75 minutes. The length may be somewhat daunting, especially if patrons consider spending that much time in a single exhibit, but Bear Hat says visitors can view the episodes a little at a time. That’s what she did.

The show opened in Calgary on March 24. The audience has varied widely and the response has been positive, says Bear Hat.

“There’s already been an attraction to the look and the feel. This is imagery, almost kind of video game type,” she said.

Skawennati started her work on TimeTraveller™ in 2008, finishing up in 2013. She started slowly exhibiting when she had completed the sixth episode.

The exhibition concludes on May 13. Visit here for more information: http://www.truck.ca/