Art used as a powerful tool to heal trauma 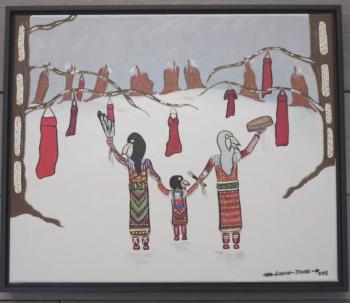 “We are Still Here” Giiniw-Ikwe by Vanessa Netemegesic.

"Going from pain to beauty gives you the opportunity to embark on a form of meditation.” — Coralee McGuire-Cyrette
By Erin Slobodian
Local Journalism Initiative Reporter
Windspeaker.com

A haunting painting of two women with a small girl between them, arms raised toward a forest of trees with red dresses hanging in them is entitled “We are Still Here” Giiniw-Ikwe by Vanessa Netemegesic.

It is just one of many works that has come out of a program that uses art as a powerful tool to confront and heal the wounds caused by the violence of murdered and missing Indigenous women and girls (MMIWG) and human trafficking.

It was a little more than one year ago that the national inquiry into MMIWG released findings that that violence “amounts to a race-based genocide of Indigenous Peoples, including First Nations, Inuit and Métis, which especially targets women, girls, and 2SLGBTQQIA people.”

An RCMP report released in 2014 said there were 1,017 homicides of Indigenous women between 1980 and 2012, revealing a rate of about 2.6 deaths a month. The inquiry found the RCMP's numbers were likely an undercount.

The final report of the inquiry states that this “genocide has been empowered by colonial structures, evidenced notably by the Indian Act, the Sixties Scoop, residential schools and breaches of human and Indigenous rights, leading directly to the current increased rates of violence, death, and suicide in Indigenous populations.”

In other words, Indigenous women and girls are being taken and murdered at a high rate in Canada as a direct result of the effects of colonialism which has stripped Indigenous people of their culture, their leadership and their voices. It is here that the Ontario Native Women's Association (ONWA) is placing a massive focus on healing. The organization is calling on Indigenous women to take up their leadership roles within the family and in the community.

“We focus on the healing as part of reclaiming that leadership,” said ONWA executive director Coralee McGuire-Cyrette.

The journey to healing is often a long road that can take many paths, but ONWA understands that women supporting women and expressing trauma through art are two methods that resonate with Indigenous women who are hurting.

“Healing is a spectrum and art is one tool of many to help support people through their healing journey,” explained McGuire-Cyrette.

“Art creates a space for people to talk about their trauma in a very safe and powerful way. A piece of art will tell such a strong story and to be able to really hear that story and to watch people reclaim their story and not allow their trauma to define who they are. It really is a beautiful thing.”

The program was started with a quilt. Families worked on quilt squares together as part of their healing process.

“They were able to share their stories, share their pain, share their grief, their happiness, their vision through a very safe way to talk about your trauma through art as healing,” said McGuire-Cyrette.

Eventually all the quilt squares were stitched together to form a large blanket and the Ontario Native Women’s Associations’ art program was born.

“When you’re looking at art as a form of expressing your anger, your pain, your sorrow, your happiness. Going from pain to beauty gives you the opportunity to embark on a form of meditation.”

To read more on the art initiative, visit https://www.mediaedgemagazines.com/ontario-native-womens-association-onwa/oi20/