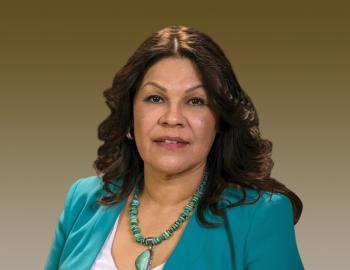 “We need to have the political will and be serious about working together to address systemic racism in Alberta.” — Regional Chief Marlene Poitras
By Shari Narine
Local Journalism Initiative Reporter
Windspeaker.com

Alberta Regional Chief Marlene Poitras is determined not to be frustrated by provincial government officials who are only now “becoming aware” of the racism faced by First Nations in the province. She’s wiling to accept that if it leads to change.

“The discovery of those children in residential schools, I really believe, has woken up people to the issues of First Nations people in this country,” said Poitras, referring to the unmarked graves located at former residential school sites at Tk’emlups te Secwépemc, B.C., Cowessess First Nation, Sask. and other places in recent months.

“I think that while the awareness was likely there, the will to do something is now becoming more evident because of what happened,” said Poitras.

Yesterday, Health Minister Tyler Shandro announced that the province would be providing close to $2.8 million to fund Indigenous-led mental health services for those impacted by Canada’s residential school system.

After that announcement, Shandro held a meeting with Environment and Parks Minister Jason Nixon, Poitras and O’Chiese First Nation Chief Douglas Beaverbones and Sunchild Councillor Joey Pete to discuss a recent incident of racist treatment. Also at the meeting were representatives and staff from Rocky Mountain House and Clearwater County. Nixon is also MLA for Rimbey-Rocky Mountain House-Sundre.

Earlier this month, O’Chiese member Sonny Strawberry posted on social media two encounters he had in quick succession.  On July 4, he flagged down Lakeside EMS. He was on the road with his mother sitting beside him in his car, unconscious. But the EMS paramedics turned down Strawberry and care to his mother saying they were “out of service.” Later, at the hospital, a security guard challenged his sobriety and accused him of bringing in drugs.

From this incident, O’Chiese, Sunchild and Big Horn First Nations and the town of Rocky Mountain House announced the formation of an anti-racism task force.

Poitras says Nixon “is going to be more involved in working with the Nations and figure out what exactly they need to get this task force up and running in a good way.”

“Racism has no place in this province, least of all in the health system,” said Steve Buick, press secretary to Shandro.

Poitras said accountability measures had to be put in place. A form available at a healthcare centre to be filled out with concerns is not enough.

“They fill it out and it goes wherever. Whether they deal with it or not is up to the person on the other end of things. I told (Shandro) we need to build the trust of our people that something is being done. They need to respond,” she said.

Poitras recommended a 1-800 number for complaints where there is “somebody at the other end that's going to make note of their concerns and deal with it. We need that kind of response. We need to quit talking and we need to take action.”

She also pointed out that Elders, who are the most vulnerable and the most in need of treatment, are afraid to get health services so steps need to be taken “to ensure our people are comfortable using those services.”

She brought up the high number of suicides and overdoses among First Nations people. She said the money announced for residential schools is a “good start, but then we need to do more and we need to keep on top of it. And as we’re moving along and we discover what it is that we need then everybody needs to come together and figure out a way how to move forward.”

“We need to have the political will and be serious about working together to address systemic racism in Alberta,” said Poitras.

She says she believes she heard that commitment from Shandro and the other ministers.

“It was just a commitment that they spoke about and how they're becoming aware of the issues and that they want to do something about it,” she said.

“The minister thought the meeting was very positive and respectful on all sides. There was real value in bringing this group together so that AHS could hear the concerns of the First Nations face to face, and he’s deeply grateful to the chiefs for their engagement, and their commitment to working through the issues,” said Buick.

Buick said that Shandro committed to meet with the chiefs to review progress and hear any other concerns.