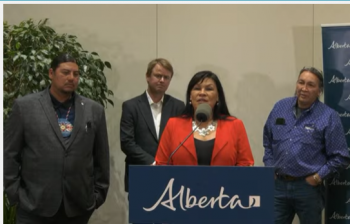 “Once they start praying, you could feel it. You could almost feel the kids. It was very emotional day for people around there.” — O’Chiese First Nation Chief Douglas Beaverbones about a ceremony he attended at Tk’emlups te Secwépemc, B.C.
By Shari Narine
Local Journalism Initiative Reporter
Windspeaker.com

First Nations and Métis communities now have a $2.8 million pot of provincial funding available to them from the Alberta government to provide mental health supports to their members who have been impacted by Canada’s residential school system.

In his announcement today, Health Minister Tyler Shandro stressed that the mental health services will be Indigenous-led. Funding through the new Residential School Mental Health Support Grant program will cover counselling services and traditional healing practices such as talking circles among other methods.

“It’s very important that it is First Nations, Métis and Inuit led because we know,” said Alberta Regional Chief Marlene Poitras. “We’re experts at what the issues are in the communities and we can provide some really good direction in terms of the healing that needs to take place.”

Alberta was home to the most Indian residential schools in Canada.

Shandro, who was also flanked by Indigenous Relations Minister Rick Wilson, said plans first got underway to examine the support that the province could provide to Indian residential school survivors, their families, intergenerational survivors, and those who lost children to the residential school system when graves were uncovered at Tk’emlúps te Secwépemc, B.C. and Cowessess First Nation, Sask.

Beaverbones said that on July 1 he was at a ceremony held at Tk’emlups te Secwépemc. He spoke and “got really emotional.”

“Once they start praying, you could feel it. You could almost feel the kids. It was very emotional day for people around there,” he said.

Beaverbones said he appreciates the funding for the new program.

“I think it’s a big step for our people. A huge step. I know it’s not going to heal the wounds that we faced back then and what we face today … but I’m glad that we got that funding to continue with the process that we’re facing and to continue just to move forward, just to keep moving,” he said.

Pete said Indigenous people – and not just those on his First Nation – were still facing trauma from residential schools and other issues as well. He pointed out that funding for programs on reserves were lacking and that the federal government had to be held accountable for not providing adequate resources and living up to treaty commitments. He said leadership was doing the best they could to meet their peoples’ needs.

“We are trying our best to do what we can for our people, but with limited resources. So I just want to thank the ministers for stepping up and trying to start off somewhere, especially for residential schools and all the survivors and all the lost children in the past,” said Pete.

Shandro said the funding would be available “almost immediately” once applications were submitted. Information has gone out to First Nations, the Métis Nation of Alberta and the Métis Settlements, he said. Grants will be allocated up to $50,000. Deadline for applications is Dec. 31.

The $4.9-million funding commitment represents a sustainable approach to address the ongoing mental health needs of Indigenous peoples and communities.