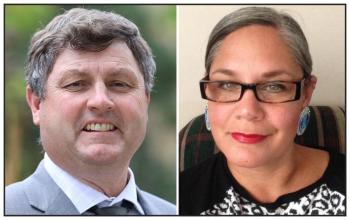 “That is an awful response to the women who are rightfully calling this genocide. That just shows the institutional systemic patriarchy that the colonial government perpetuates.” —Michelle Robinson, Indigenous leader of the Reconciliation Action Group
By Shari Narine
Local Journalism Initiative Reporter
Windspeaker.com

Even before Alberta Indigenous Relations Minister Rick Wilson announced the pending formation of a Premier’s Council to guide the province’s plan in tackling violence against Indigenous women and girls, his actions were condemned as not enough.

On June 3, the third anniversary of the final report from the National Inquiry on Missing and Murdered Indigenous Women and Girls and gender-diverse people, which set out 231 Calls for Justice to bring about institutional and systemic changes to better protect this group’s vulnerabilities, the Calgary/Blackfoot Confederacy-based Reconciliation Action Group released a statement saying “it is doubtful that (Wilson’s announcement later that morning) will contain meaningful, timely, and fully-funded actions.”

When Windspeaker.com asked Wilson about the lack of faith that was being expressed in his government, Wilson dismissed the concern saying he was unaware of the organization and that he had the support of the chiefs of the Blackfoot Confederacy, listing Kainai Nation Chief Roy Fox as a “dear friend of mine,” Piikini Nation Chief Stanley Grier and Siksika Nation Chief Ouray Crowfoot.

“I work really closely with them, so I’m not sure which group is saying this, but I know that a lot of the chiefs have faith in me and I can tell them from my heart that we’ll be doing a lot of work to help them wherever we can,” said Wilson.

“So, the male-imposed leadership from the Canadian government is enough for him on the issue of missing and murdered Indigenous women and girls and two-spirits?” said Michelle Robinson, Indigenous leader of the Indigenous-settler Reconciliation Action Group.

Robinson, a member of the Sahtu Dene, says considering the Alberta UCP government’s track record, it wasn’t a stretch to determine that whatever Wilson said his ministry would be doing wouldn’t be enough.

“I think this is a positive step (creating the Premier’s Council), but I'm just saying it has no substance, when we have the actions of the government not supporting any of this work,” said Robinson.

She points to an obvious double standard when police in Alberta failed to implement the Critical Infrastructure Defence Act when truckers closed down the Coutts’ border crossing into the United States earlier this year in protest of coronavirus vaccine mandates. The act was prompted by blockades earlier that year over a pipeline dispute in northern British Columbia. Protesters supported the Wet’suwet’en hereditary chiefs in their opposition to the Coastal GasLink pipeline.

“If I were to fight against the RCMP the way the non-Indigenous did, I would one hundred per cent be in jail,” said Robinson.

Worse yet, she says, is the province’s attempt to reform the education curriculum, which proposed not teaching about treaties until Grade 4 and residential schools until Grade 5.

“We're talking about a government who refuses to give the truth in its own curriculum. What is setting up a council going to do to help the situation of violence against Indigenous women and girls and two-spirit where we already have a government that's in denial of sovereignty issues … as well as the truth of the history?” said Robinson.

“Truth of the history” is also reflected in the Alberta government’s refusal to use the word “genocide” when it comes to institutional systems in place that allow for violence to be perpetrated against Indigenous women and girls and 2SLGBTQQIA people. It’s the word used by missing and murdered national inquiry chief commissioner Marion Buller, says Robinson.

Wilson said while his government isn’t using “genocide” to describe what is happening, “we allowed (the members of the Alberta Joint Working Group on missing and murdered Indigenous women and girls) in their biographies to say whatever they like and some of them did use the word ‘genocide’ and we allowed them to put that in the report.”

“That is an awful response to the women who are rightfully calling this genocide. That just shows the institutional systemic patriarchy that the colonial government perpetuates,” said Robinson.

She says that until the Alberta government takes an “all feet are in” approach to the issue, it will remain “siloed … (and) it's just making a checkbox as opposed to substantial change.”

Wilson said that tackling the issue will be a cross-ministry approach, including justice, mental health and addictions, and community and social services, with funding coming from numerous ministries. He did not, however, offer a budget figure.

He said that the Premier’s Council, which is the first recommendation in 113 made by the Joint Working Group in the Pathways to Justice report, will have a five-year mandate and consist of 12 members, the majority of whom will be Indigenous women. His department is working on parameters for the council, but Wilson offered no timeline beyond “we’ll get it up and running as quick as we can.”

The Premier’s Council will be tasked with reporting to the premier, through Wilson, on government action and identifying the gaps that need to be addressed to eliminate violence.

The Joint Working Group also set out a “roadmap” that will be used to guide the council’s work. There are four pathways: Community connections, healing and cultural supports; Education, economic independence and infrastructure; Community wellness and improving the justice system; and Accountability to and inclusion of Indigenous women and girls.

“We appreciate the work that the government of Alberta (is doing) and their commitment to action in establishing a Premier’s Council. It’s so very important. It’s an opportunity for us to work collaboratively with government to implement this roadmap that we’ve developed,” said Rachelle Venne, CEO of the Institute for the Advancement of Aboriginal Women and former co-chair of the Alberta Joint Working Group.

Venne said the discussions were difficult and the group put together the best recommendations they could to go to the government for action.

The Joint Working Group was established in March 2020 and filed its final report with the Alberta government this past January.

Alberta has the second-highest number of missing and murdered Indigenous women in Canada. Out of all the MMIWG cases in Canada, Alberta has 16 per cent and 42 per cent of those cases remain unsolved.