Alberta is “guessing” when it comes to spill recovery 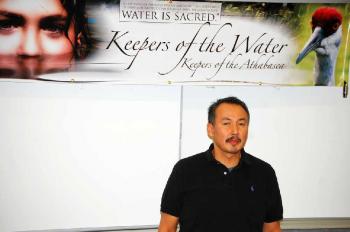 A researcher hired by the Dene Tha First Nation and Keepers of the Water has given the Alberta Energy Regulator a failing grade for its efforts to acquire and report accurate scientific data.

Dr. Kevin Timoney examined oil spill clean-up in the Hay River basin in northwest Alberta. He reported his findings on Feb. 2 at the University of Alberta saying his forensic investigation indicates “red flags”.

AER claims that almost every spill was completely cleaned-up, but numerous spills were not included in the AER’s statistics.

In fact, said Dene Tha First Nation Chief Joe Pastion, it was the AER’S claim that contaminated soil had been fully reclaimed that pushed the First Nation to hire Timoney and ask him to do a “more detailed, thorough assessment.”

“These regulatory bodies and regulatory policies don’t measure up,” said Pastion about what is happening to the environment and land.

Timoney estimates that another 3,500 to 4,000 spills prior to 1975 had either crude oil or saline as the primary component.

He noted that the spills accounted for in AER’s statistics did not include spills under federal jurisdiction, or reported to Alberta Environment.

Not only were the number of spills inaccurate, Timoney said, so was the total volume of crude oil or saline spilled. That number should be much higher. He noted examples in which the recorded volume spilled did not include the site of the actual rupture.

Further, the AER was not reporting accurately when it gave figures for crude oil or saline sucked out of contaminated soil.

He based that finding on what he referred to as the “falcon effect,” which could be noticed when crude oil or saline spills recovery efficiency was plotted on a graph. The efficiency rate was too patterned and formed the shape of a peregrine falcon.

“This indicates that these numbers are not measured. They’re based on a human assigning a number. They’re guessing,” said Timoney.

Further, Timoney compared AER’s reported success rate to work undertaken in North Dakota. He said North Dakota indicated that in 3.4 per cent of oil spills there was perfect recovery compared to Alberta’s 53 per cent.

AER was “off the scale in terms of believability with the very low effects on the environment” as AER numbers indicated few birds, wildlife or habitat impacted.

“I think it’s fairly clear from the data I’ve gone over in the last year-and-a-half that both industry and the regulator tend to underreport or fail to report wildlife effects,” he said.

In December both the AER and Alberta government refused Timoney’s offer to review his study “to bring to attention these findings so they could discuss them and be prepared for when these results were released.”

Timoney called for public involvement in monitoring oil spill effects and reclamation. He noted that some sites he collected specific information on for his study he would not have known about if Dene Tha First Nation members hadn’t taken him there.

He also called for a complete overhaul of the AER.

AER spokesperson Tracie Moore has said the database was never meant to provide a complete picture of spill cleanup. She also said AER relies on industry to accurately report volumes released and recovered.

Also partnering in this report were Beaver First Nation, North Peace Tribal Council and the Treaty 8 First Nations of Alberta. 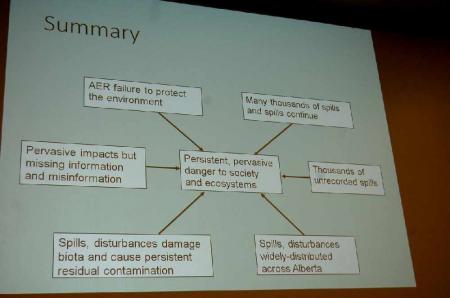