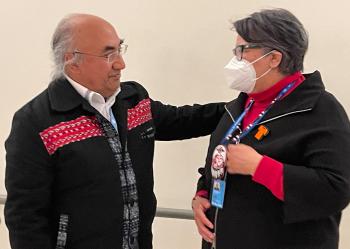 “You have to actually formalize the invitation, otherwise the rapporteur comes and is not able to do anything official in terms of documentation or study.” — National Chief RoseAnne Archibald
By Shari Narine
Local Journalism Initiative Reporter
Windspeaker.com

A standing invitation from Canada for the United Nations special rapporteur to come to this country to investigate the deaths and burials of children in relation to Indian residential schools is not enough.

Archibald says she made her three-day trip to the United Nations Permanent Forum on Indigenous Issues (UNPFII) in New York from April 25 to April 27 specifically to ask Francisco Calí Tzay, special rapporteur on the rights of Indigenous Peoples, to come to Canada “to investigate the deaths of our children. We’re seeking remedies for human rights violations, including genocide.”

“You have to actually formalize the invitation, otherwise the rapporteur comes and is not able to do anything official in terms of documentation or study,” said Archibald.

In a press conference at the UN on April 25, Archibald was adamant that Canada should not be allowed to investigate itself as it was this country’s polices and legislation that led to the creation of the Indian residential school system.

A resolution was passed by the AFN in December to “direct the AFN to seek justice through intervention at the International Criminal Court in this matter, to hold the Imperial Crown, Government of Canada and the Vatican accountable for their actions and to seek justice for the crimes against humanity for the victims’ families and the international community.”

Canough was addressing the UNPFII on April 28.

Speaking to Trudeau about issuing that formal invitation to Calí Tzay is one more item on the ever-growing agenda, says Archibald, who points out that there has been no formal meeting between the AFN executive committee and Trudeau since 2019.

Trudeau did attend the Special Chiefs Assembly in December 2021.

“It’s been three years since the prime minister has met with the Assembly of First Nations (executive) so that’s a problem onto itself. Yes, there will be a number of items that we will discuss with the prime minister and I believe one of the key ones is why is this (memorandum of understanding) not functioning properly. We clearly need a new process,” said Archibald.

In 2017, Canada and then-AFN National Chief Perry Bellegarde signed an MOU for a bilateral mechanism to establish a process to, among other factors, “support the renewal of the Nation-to-Nation relationship between Canada and First Nations on the basis that the First Nations are holders of Treaty rights, inherent rights, title, jurisdictions and Aboriginal rights.”

Archibald is proposing a “new economic deal.” She made that call when the federal budget was delivered in April. She wants to see First Nations benefitting fully from the resources extracted from treaty lands or unceded territories, and taxation.

“We need a new economic deal that allows First Nations the autonomy, the self-determination, the self-government that is guaranteed to them under the Constitution and those financial arrangements have to do with sharing the wealth of this country,” she said.

Other “big issues” that need to be brought into a new deal, she adds, are around safe drinking water, adequate housing, the return of culture and language, and the creation of safe and vibrant communities.

“We’re always seeking action not just words. Anybody can turn a good phrase, but when it comes to action, what is really happening on the ground,” she said.

Archibald adds that these discussions will also be happening with Jagmeet Singh, leader of the federal New Democrats, since the NDP and Liberals put an agreement in place in March to keep Trudeau’s minority government in power.

Archibald says they have “just started reaching out” to Singh’s office and are hopeful that a meeting will be confirmed shortly.