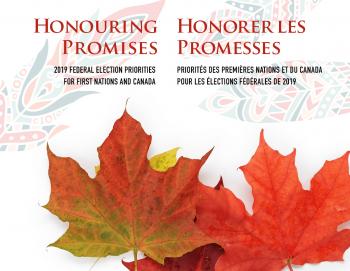 Assembly of First Nations National Chief Perry Bellegarde said some federal parties are further along than others in developing their election platforms when it comes to First Nations’ issues.

That doesn’t mean the AFN is endorsing any particular party, he said.

“I’m being very, very diplomatic as a national chief should be. I’ve got to work with whoever gets elected and bring about policy and legislative change,” said Bellegarde.

“Some (parties) are more robust in their positons right now and more clear and others aren’t. Doesn’t mean they can’t change, so you’ve just got to keep pushing them to get to the right space.”

That push began today in Ottawa when Bellegarde released the AFN’s list of priorities for whichever party is elected in October.

Honouring Promises: 2019 Federal Election Priorities for First Nations and Canada outlines 13 agenda items that a new government will be faced with, including a call for action on the global priority of climate change and preserving the natural world.

The 16-page document sets out two-year and four-year achievement markers in each category. Among the goals for the first two years is the introduction of a government bill “supported by First Nations to implement the UN Declaration on Rights of Indigenous Peoples that is at least as strong as Bill C-262.”

Bill C-262 was a private member’s bill introduced by NDP MP Romeo Saganash and which was stalled during the Senate Committee review stage.

Bellegarde said it was important that every candidate understood First Nations issues. First Nations priorities should shape the election agenda, he said.

“It’s our time to commit to action to save our planet and ourselves. To commit to ensure all children are equipped to build a prosperous future, and to commit to a promise that health, education, the economy and justice systems will work for everyone.

The plan we call Honouring Promises points the way to real transformative change and we say the time to act is now,” said Bellegarde.

Honouring Promises is a follow-up to Closing the Gap, the document AFN released to help bring First Nations issues to the forefront during the 2015 federal election.

While the gap has yet to be closed, Bellegarde said progress had been made in a number of areas, including Indigenous language and child welfare legislation. And work was being done in First Nation-led education, as well as sustainable and predictable funding.

“There is much work to do, but there is movement and momentum,” he said.

While Bellegarde repeatedly used the word “momentum” and said the optimism First Nations had when the Trudeau government was elected four years ago still existed, he refused to endorse the Liberals for a second term.

Bellegarde said he would vote again in this federal election and was hopeful that First Nations people would top the 61.5 per cent voter turnout from 2015. He said that could be helped with more ballot boxes on reserves, the elections guide translated into Indigenous languages, and setting up call centres to encourage voters in making informed decisions. He noted that First Nations voters “influenced” over 50 ridings in the 2015 election and “flipped” 21 or 22 ridings.

“I think we can have an impact, no question. My job as national chief is to influence all party platforms and that’s what we’re doing by issuing this document,” he said.