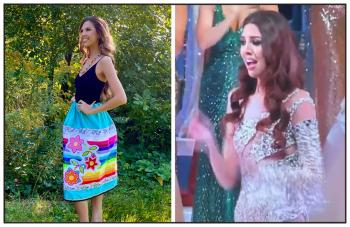 Two photos of Emma Morrison. Left she models one of the ribbon skirts she made, and right she is named Miss World Canada on Nov. 13.

“What I want to do with this title is bring awareness to Indigenous issues that we face here in Canada so I can be that voice of advocacy for my Indigenous peoples.” — Miss World Canada Emma Morrison
By Crystal St.Pierre
Local Journalism Initiative Reporter
Windspeaker.com

As she waited in the rotunda listening to the other contestants answer on-the-spot questions at the Miss World Competition Nov. 13, Emma Morrison held the tiny piece of sage she had stashed in her pocket.

“I remember holding it and speaking to Creator and saying ‘I surrender to whatever you have planned for me and whatever is supposed to happen will happen’,” Morrison told Windspeaker.com. She would be crowned Miss World Canada that night, becoming the first Indigenous woman to ever hold the title.

The 22-year-old grew up at Chapleau Cree First Nation, Ont., and competed in her first pageant, Miss North Ontario, when she was 16. She then moved through to Miss Teenage Canada at the age of 17, which opened the door for her newest crown.

Throughout the past several years since her last competition, Morrison has been busy attending secondary school and recently graduated from a private hairdressing school.

Part of the competition for Miss World Canada is that contestants must present their platform for the Beauty With A Purpose project.

This was something that Morrison had been working on for some time before she had decided to compete in the pageant.

“This initiative started (for me) after the 215 unmarked graves were found at the Kamloops residential school. Those events really lit a fire inside of me and inspired me to reconnect to my culture,” she explained.

“This is when I began sewing ribbon skirts for myself and Indigenous women to wear. I specifically began this mission because Indigenous women are 12 times higher than the national average to become a victim of homicide. The ribbon skirts I make are so important because they make Indigenous women feel empowered and reclaim their strength while wearing a traditional piece of clothing and decolonizing their wardrobe through this.”

To get started, Morrison said she started watching Tik Toks on how to make the skirts and then went and bought a sewing machine for $100 at Canadian Tire.

Since then, she has made more than 23 ribbon skirts for various women, girls and groups.

“It is so therapeutic for me and makes me feel so connected to my culture as a Cree woman, so I enjoy the whole process,” she said, adding it can take anywhere from three to 10 hours to complete one skirt.

This personal initiative of hers, titled “Reconnecting Through Ribbon Skirts”, developed into her main platform for the Miss World Canada initiative where she won first place in the Beauty With A Purpose portion of the competition.

“Everything just lined up the way it was supposed to. This is something I was doing before… It was a huge part of my life already.”

Morrison’s coach, Ashley Callingbull-Rabbit, a former Mrs. Universe, explained how Morrison’s hard work and dedication to raising awareness about Indigenous issues was a huge reason she volunteered her time to work with her.

“That is the biggest reason why I wanted to work with Emma, is she means what she says and she actually does the work,” Callingbull-Rabbit said.

“I want to work with girls that are passionate about their platforms and how they are going to give back to their community. Emma, she has been working on all these things for so long and she has that persona and that drive to really push herself forward and she’s doing it for all the right reasons.”

Callingbull-Rabbit, originally from Enoch Cree Nation in Alberta, has been in the modeling business for many years and became, in 2015, the first Canadian and Indigenous woman to win Mrs. Universe. More recently she was the first Indigenous woman to be featured in the Sports Illustrated Swimsuit Edition.

For many years, she has been a support to Indigenous women who want to get a foot in the door of pageantry and said her experiences are there to share with others to offer guidance through their journey.

“When I joined the pageant circuit, I was the only Native woman competing. There was no one there to pave the way for me or tell me what to expect or how to deal with situations. Especially as Indigenous women we deal with so much stereotypes, racism and also not feeling welcomed in those spaces,” she said.

Callingbull-Rabbit has mentored women from Canada and the United States on everything from what to wear and recruiting sponsors to editing speeches; or just being a supportive ear when nerves are getting the best of her “sisters.”

“All these Indigenous women who are finally rising and taking up space in the pageant scene, I’m like ‘those are your sisters and you have to rise with them’,” she said.

Morrison said CallingBull-Rabbit is a very respected leader in the business and was so honoured to have her on her team.

“She is a huge inspiration for pageant girls because she comes from a small town, small reserve, and she won this massive title,” Morrison explained. “She was there really every step of the way. She really reminded me to be that proud Indigenous women and walk with my head high in this competition and to stay true to my roots.”

A sentiment Morrison said she will continue as she fulfills her reign as Miss World Canada and prepares for the international 72 Miss World competition in 2023.

“I have always had a voice, but this helps me raise my voice on a louder scale so my voice can be heard nationally,” Morrison says of her new title. “What I want to do with this title is bring awareness to Indigenous issues that we face here in Canada so I can be that voice of advocacy for my Indigenous peoples.”

These issues include raising awareness about the 60 communities without access to clean drinking water in Canada, that Indigenous women are more likely to become victims of homicide, as well as the issues of the residential school system and its ongoing legacy in First Nation communities, Morrison explained.

“There’s a lot of change that needs to happen here in this country. If people have more education about what’s going on in our First Nation communities, then we could see change,” she said.

Morrison will also continue to make ribbon skirts, with all proceeds given to a women’s shelter in Ottawa where she is currently living.

“During my reign I’m going to bring more awareness to this and that’s going to be one of my responsibilities I am going to hold myself accountable for.”