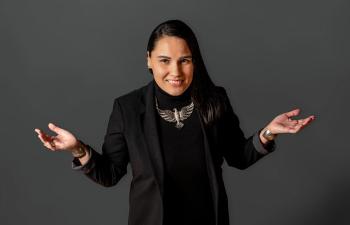 A selection committee has once again come to some difficult decisions for this year’s Indigenomics “10 To Watch” list.

This marks the fourth year the Indigenomics Institute has put out the list that recognizes those companies that demonstrate excellence and leadership in the Indigenous economy.

“The intention is to bring focus to what leadership looks like in the $100 billion Indigenous business economy,” said Carol Anne Hilton, founder and CEO of the Indigenomics Institute, which supports with research, education and engagement the rebuilding and design of Indigenous economies throughout the world.

Hilton was one of four people on the selection committee that picked those that would be named to the list, sifting through 70 nominations this year.

“Some of these are pooled from the previous two years,” Hilton said, adding nominees from 2020 and 2021 that did not make the list in either of those years were automatically eligible for recognition this year.

The 2022 recipients were recognized at a conference staged May 19 and May 20 in Vancouver.

Awards are annually presented to businesses, partnerships or initiatives that demonstrate leadership in the Indigenous economy.

Among those who cracked this year’s “10 To Watch” list was OneFeather, a Victoria-based Indigenous technology company, which specializes in Indigenous banking solutions. It also provides election and voting services.

“OneFeather is thrilled to be recognized as one of the top 10 Indigenous companies to watch for 2022,” said Lawrence Lewis, the CEO and founder of OneFeather.

“We strive every day to provide digital solutions to Indigenous people and communities which unlock wealth, build strong communities, celebrate our sovereign identity, and lift our people up.”

The TNDC was established in 1985. The corporation is involved in various sectors, including heavy construction, camp services, aviation, energy, forestry, transportation and fibre optic communications.

A recently-launched company, Indigeno Travel, was also named to the list.

This company, which had its formal launch in late March, is the first national full-service Indigenous-owned travel and tourism agency in North America.

The company, which has its headquarters in Winnipeg, creates career opportunities in travel and tourism. Indigeno Travel has associate offices in Edmonton and Brockville, Ont.

JEDI is an Indigenous organization that was founded in 1995. It works with various partners to promote Indigenous economic development throughout New Brunswick.

The Regina-based First Nations Power Authority is a not-for-profit organization founded in 2011. It assists with the development of power projects led by First Nations and also promotes Indigenous involvement in power procurement opportunities.

The TMX Group, which operates global markets including the Toronto Stock Exchange, was recognized for its leadership in economic reconciliation.

The others named to the Top 10 list were: Supernaturals Modelling; CreeCo; Indigenous Box and the Nassituq Corporation.

Hilton praised Axxcelus Capital Advisory, the lead sponsor, for its ongoing support of those on the “10 To Watch” list.

“Igniting the 100-billion-dollar Indigenous economy will require leadership at all levels,” said Paul Poscente, the CEO of the capital advisory firm that facilitates ownership in major assets for Indigenous communities.

“These worthy recipients are each trailblazers and innovators and we are proud to honor their efforts. Axxcelus exists to support the path to economic sovereignty for Indigenous communities and will watch with anticipation for the future achievements of these recipients.”

Hilton said the Indigenomics Institute will continue to recognize companies and organizations in Canada with its annual “10 To Watch” list.

But that could change some year.