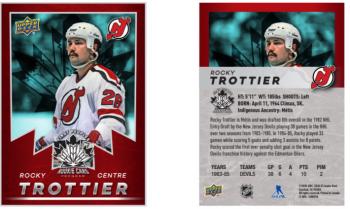 Rocky Trottier is a prime example of the type of player the project is looking to honour.

“I keep thinking about those little kids opening up those packs of cards and seeing themselves in those players from the past.” — Naim Cardinal
By Adam Laskaris
Local Journalism Initiative Reporter
Windspeaker.com

On Saturday night, Upper Deck’s Chris Carlin made the announcement that an upcoming line of hockey cards will feature Indigenous NHL players that never had rookie cards made for their achievement.

The main goal behind the project is to recognize those lesser-known NHLers who were, in most cases, only in the NHL for a short period of time. The cards will not be available for sale in traditional packs, but rather distributed across North America to Indigenous hockey tournaments, organizations and individuals.

During the announcement, Carlin was joined by Naim Cardinal, an avid collector and driving force behind the project.

Carlin and Cardinal presented the news of the project via the ‘Sports Cards Live’ YouTube show hosted by Jeremy Lee.

Cardinal, who is a member of the Tallcree First Nation (Alberta), has a website that showcases his personal collection of rookie cards for 90 current and former NHL Indigenous players.

Cardinal, who describes himself as a “lifetime collector”, began rounding up rookie cards for Indigenous hockey players back in 2014.

“That’s the way I stayed connected to my heroes,” he said on Sports Cards Live.

Carlin described postcards and other pieces of memorabilia in Cardinal’s collection of Indigenous players who didn’t have rookie cards as being “amazing”, but he felt more could be done to recognize these players.

“For me, I feel like [these items] were a placeholder for what that person deserved, which is a licensed, NHL card,” Carlin said. “I just finally was like, ‘it’s time’.”

Carlin, a self-described “white guy from California”, did admit he had some internal dialogue about whether it was his place to be involved with Upper Deck in the creation of this project. But, ultimately, he decided it would be a worthwhile endeavour for the company. He contacted Cardinal with the idea, and the two of them created an advisory committee for the First Peoples Rookie Card program made up of people involved in the Indigenous hockey community.

The entire process has been going on for just under two months. One of the biggest tasks for the advisory panel has been tracking down and contacting either the players who will be featured or their family members.

With many, the players’ time in the NHL dates back several decades, so limited information about them is available. And it can be a challenge to reach these players and families.

“It has been a lot of hard work, but it’s really worth it,” Cardinal said. “Sometimes they feel like they’re forgotten about. Their career has been over for so long and they never got a hockey card. For us to remember them this way, it’s such a huge honour.”

While a full list of the players picked or how the cards will be distributed is yet to be finalized, a prototype of the cards was created for Rocky Trottier, younger brother of Hall of Famer Bryan Trottier. Rocky is a prime example of the type of player the project is looking to honour.

While Bryan played 18 NHL seasons, winning six Stanley Cups with the New York Islanders and the Pittsburgh Penguins, Rocky played 38 games across two seasons with the New Jersey Devils in the 1980s. 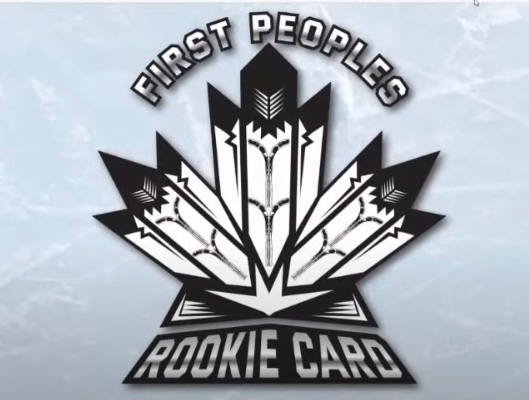 The prototype features a logo created by Nakota Sioux artist Jacob Alexis from the Alexis First Nation. The logo features a maple leaf made up of eagle feathers, and contains nods to the original Mi’kmaq hockey sticks from the 1800s, as well as lightning to honour the Thunder Beings, and water as the most basic element essential for hockey, as it makes up the ice.

Cardinal said he’s excited that children will be able to see their culture represented in the final product.

“I keep thinking about those little kids opening up those packs of cards and seeing themselves in those players from the past,” he said.

While there is no release date for the set, Carlin said he’s hoping for sometime in the 2021 calendar year.

“For the former players to be acknowledged this way, that’s so worth it to me,” Cardinal said. “That’s who I do it for.” 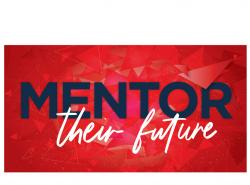