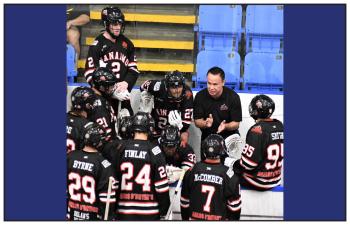 Western Lacrosse Association coach of the year Tewanee Joseph with the Nanaimo Timbermen.

“In Tewanee Joseph we knew we were getting a first-class coach and person of tremendous character. The Nanaimo Timbermen are thrilled Tewanee has received this much deserved recognition from the WLA.” — Timbermen president Chris Bowman
By Sam Laskaris
Local Journalism Initiative Reporter
Windspeaker.com

Tewanee Joseph has had some immediate success in his first year of coaching in the Western Lacrosse Association (WLA).

In fact, earlier this week it was announced that Joseph, a Squamish Nation member, has been selected as the WLA’s coach of the year.

The accolade, which was made public on Tuesday, Aug. 9, was for Joseph’s regular season performances serving as the head coach of the Nanaimo Timbermen.

This marked the first time since the WLA was launched back in 1969 that four franchises ended up in a tie for first place in the standings.

Head-to-head matchups were then examined to determine playoff seedings. The Timbermen ended up third, behind the first-place Langley Thunder and runner-up Coquitlam Adanacs but ahead of the fourth-place Victoria Shamrocks.

Joseph, who is 50, was surprised he was selected as the WLA’s top coach.

“I never thought I had a chance to win this,” he said. “It didn’t cross my mind.”

Though he is the one who captured the award, Joseph was also quick to praise others.

“I think it is a true reflection of everybody on our team, from the coaches to the players to the training staff,” he said.

Joseph considers it a true honour to be coaching in the WLA, a Senior A league featuring the highest level of amateur men’s box lacrosse in the country.

Though the WLA, which plays throughout the spring and summer, is considered an amateur circuit, it features numerous athletes who also play the sport professionally in the National Lacrosse League (NLL).

By coaching in the WLA, Joseph is following in the footsteps of his great-grandfather Andy Paul, who coached the North Shore Indians back in the 1930s.

Paul led the Indians to an appearance at the 1936 Mann Cup, the national senior men’s championship, which was won by the Ontario-based Orillia Terriers.

The WLA champions traditionally square off against the winners of Ontario’s Major Series Lacrosse (MSL) playoffs in a best-of-seven Mann Cup series.

The Mann Cup was not awarded in 2020 or last year because of the COVID-19 pandemic. But this year the national series will be in Ontario, hosted by this year’s MSL champs.

Joseph and the Timbermen are hoping to represent the WLA in that event. Based on its early playoff successes, the Nanaimo squad just might do that.

The Timbermen have won all of their post-season matches so far. And Nanaimo leads its WLA best-of-seven semi-final series versus Coquitlam 3-0.

The Timbermen will be looking to sweep the series when they host the Adanacs on Friday night.

Meanwhile, Langley and Victoria are deadlocked at 2-2 in the other league semi-final series. The Shamrocks are scheduled to host Game 5 on Saturday.

The Timbermen appear to be peaking at just the right time.

“Our goal has been to get stronger throughout the year,” Joseph said. “We’ve won 11 out of our last 12 games. For us it’s been important to get better each game.”

Timbermen president Chris Bowman is obviously pleased with what Joseph has been able to accomplish with the Nanaimo squad and that his bench boss was recognized by the league.”

“In Tewanee Joseph we knew we were getting a first-class coach and person of tremendous character,” Bowman said. “The Nanaimo Timbermen are thrilled Tewanee has received this much deserved recognition from the WLA.”

Joseph would love to eventually take his coaching talents to the pro level. Last year, while coaching a Senior B club, he posted on Twitter that he was keen to coach in the NLL one day.

He took a step in that direction when he was named a co-coach for the Grizzlies Lacrosse Club, which participated in the inaugural season of the West Division in the Arena Lacrosse League (ALL).

The ALL, which is a developmental league for the NLL, launched in 2017 with an Ontario-based loop.

The ALL’s West Division, featuring four B.C. franchises, was added this past year.