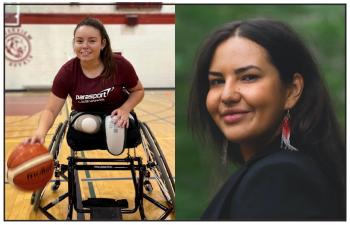 A new Indigenous sports research project that could potentially influence Sport Canada decisions has been launched.

Earlier this summer, an Indigenous-owned company called Archipel Research and Consulting Inc. won a bid to conduct a project, which it is calling “Indigenous Peoples in Sport: Research and Data Plan”.

A goal of the project is to try to get a sense of how many Indigenous athletes participate in sports throughout the country.

Another project goal is to gain insight into how to identify the needs of Indigenous athletes who compete in sports throughout the country.

Sabre Pictou Lee, the CEO of Archipel Research and Consulting, said the research project hopes to be able answer the question of what sport means to Indigenous people.

“This is that stepping stone to help bridge those worlds,” Pictou Lee said of the project.

Pictou Lee said her company’s research project is a continuation of work that had already been conducted by Indigenous researchers and leaders in the country who are keen to change the sports realm in Canada.

The resulting report, titled the Aboriginal Sport Circle: Indigenous Research Initiative, is not currently available to the public.

That work was spearheaded by Dr. Janice Forsyth, a former Western University professor in London, Ont., who is now a professor with University of British Columbia’s Indigenous land-based physical culture and wellness program.

“We are aiming for a total participation of 40 people,” said Pictou Lee, who is from the Mi’kmaq community of Eel River Bar First Nation in northern New Brunswick.

“But that does not necessarily mean we’ll have 10 people in each group.”

All of the sharing circles will be two hours in length.

“We have identified a list of individuals for each group,” Pictou Lee said.

The first sharing circle, which will be held on Sept. 6, will include officials from Indigenous sports organizations across Canada.

The next session, which will be held on Sept. 8, will feature reps from non-Indigenous sports groups throughout the country.

A Sept. 13 sharing circle will then see Indigenous researchers take part. And the final online meeting is scheduled for Sept. 15. It will include Indigenous athletes, coaches and officials.

Pictou Lee said project organizers might have to conduct some one-on-one interviews with some participants if they are unable to attend one of the virtual sessions.

Once all available data has been compiled, a report will then be written, with recommendations, and then it will be passed on to Sport Canada.

“The report will be delivered to Sport Canada by December,” Pictou Lee said.

A project goal is to have its recommendations considered by Sport Canada officials for its future programming.

The research component for the project will be led by an Indigenous advisory group (IAG), which includes Elders, knowledge keepers, and others.

So far, the IAG consists of nine individuals, including Forsyth, the current vice-president of the Aboriginal Sport Circle.

Lacquette became the first First Nations woman to represent Canada in hockey at the 2018 Winter Olympics. And Horn-Miller is a former water polo player. She’s a Mohawk woman who served as the captain of the Canadian women’s water polo squad at the 2000 Sydney Olympics.

Desiree Isaac-Pictou, a wheelchair basketball athlete and a business administration student at the University of New Brunswick, is also a member of the IAG.

The others on the advisory group are Amanda Larocque, Wally Samuel, Dr. Margaret Kovach, Shane Keepness and Dr. Lynn Lavallee.

Larocque is the director of health and social services at Gesgapegiag Health & Community Services in Quebec.

Samuel is an Elder who also sits on the board of directors for British Columbia’s Indigenous Sport, Physical Activity & Recreation Council.

Kovach is an expert in Indigenous research methodologies and a professor at the University of British Columbia.

Keepness is a lecturer in Indigenous studies at First Nations University of Canada.

And Lavallee is the strategic lead in Indigenous resurgence for the Faculty of Community Services at Toronto Metropolitan University.