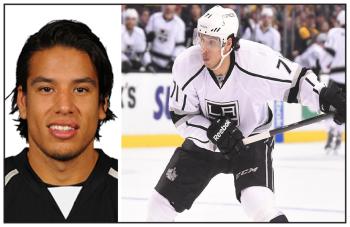 Former NHLer Jordan Nolan is an ambassador with the LA Kings and part of the 3 Nolans Hockey School.

“We’re trying to create just good and happy human beings that work hard and realize that life has its ups and downs and challenges that you’re going to have to overcome.” — Jordan Nolan
By Sam Laskaris
Local Journalism Initiative Reporter
Windspeaker.com

Though his own playing days are over, Jordan Nolan is still helping others with their hockey careers.

He was with the Los Angeles Kings when they captured back-to-back Cup titles in 2012 and ’13. And he won another ring with the St. Louis Blues’ when they were crowned league champs in 2019.

Though he played his final NHL game with St. Louis in 2019, Nolan did toil the following season in the American Hockey League (AHL) with the San Antonio Rampage. And then he suited up for a pair of games with the AHL’s Wilkes-Barre/Scranton Penguins during the 2020-21 campaign before retiring.

It didn’t take Nolan long, however, to get involved with an NHL franchise again. Last season he was hired by the Kings to serve as a community relations advisor and ambassador.

He worked with various inner-city children trying to grow the sport in the Los Angeles area. One particular highlight stood out for Nolan last season.

“Luckily enough, we worked with an organization there and we brought in about 25 Indigenous kids from all over the States,” said Nolan. “They were high school kids and it was their first time on the ice. We had a week-long camp with them with brand new gear and some brand new skates.”

Nolan was thrilled to play a role with that camp.

“For these kids to get on the ice to try something new; a lot of them were scared and nervous, but near the end of the week they were really trying because they were so happy to take part with that,” he said.

Nolan, who attended the Toronto Maple Leafs’ Indigenous Celebration game held Jan. 7, is currently spending a good chunk of his time this season working with the 3 Nolans, a hockey school launched in 2013 with his brother Brandon and their father Ted.

Brandon Nolan, also a former pro, played for five minor pro franchises and suited up for six games with the NHL’s Carolina Hurricanes before concussion issues forced him to retire.

“Right now our hockey schools are pretty busy and that’s what we like to do,” he said. “It really brings us into communities that people don’t want to go. It’s not easy travels to get to these places. They are remote communities and northern cities. So, for us to go there I think it means a lot to the kids and communities. And it means a lot to us too that we’re doing this and doing this work and sharing our message and our experience about life.”

Since he is now also a political advisor with the Chiefs of Ontario, Ted Nolan has not been able to join his sons for many of the 3 Nolans tours this season.

“We’re really not trying to create the next Mitch Marner or Auston Matthews,” Jordan Nolan said. “We’re trying to create just good and happy human beings that work hard and realize that life has its ups and downs and challenges that you’re going to have to overcome.”

The former pro is someone well prepared to talk about that. Nolan, who is now 33, appeared in a total of 405 NHL matches.

“Even though I played in the NHL for a number of years, there was still a lot of hard work that went into that,” he said. “And then there’s life after hockey. And that again is a new challenge. It’s all about working hard and being committed to things and trying new things also.”

The Maple Leafs are one of the 3 Nolans’ main sponsors, so Nolan was pleased to see the franchise hold an Indigenous Celebration game this past weekend.

“To come here and see the work that they’ve put on is pretty special,” he said.

“I see some familiar faces in the crowd and that is pretty meaningful. Hopefully more teams start watching the Leafs trying something new here by showing our culture and maybe people watching in the crowd will say ‘What’s this?’ and go home and learn about it and talk about it and just create conversation.”

Nolan is also looking forward to continuing his involvement with the Kings.

“Right now we’re trying to figure out each other’s schedules,” he said. “I’ll definitely still be working with them for sure this season and in the summer time when their camps are.”

Nolan played portions of six NHL seasons with the Kings.

“I think the L.A. Kings are a pretty first-class organization,” he said. “From the time that I got there (I saw) their management team and their office staff is a lot different than other teams. That’s what they try to do there. They are more diverse and are trying to grow the game. There’s a lot of women involved there. And I think they are one of the leaders in the NHL for diversity and inclusion.”