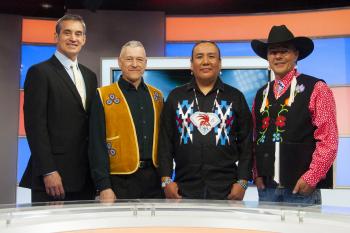 Hockey Night in Canada in Cree is beginning with a match-up of the Winnipeg Jets against the Ottawa Senators on Jan. 15.

“I was really nervous, right? Who wouldn't be nervous? I was just thinking about all these people watching. But when I came home, I saw the effect it had on our people that one of their own was a part of that.” —Earl Wood, Hockey Night in Canada in Cree broadcast host
By Adam Laskaris
Local Journalism Initiative Reporter
Windspeaker.com

After making its debut in 2019 as part of the Sunday night Hometown Hockey broadcasts, Aboriginal Peoples Television Network (APTN) will broadcast six Saturday games in the Plains Cree language this season.

Hockey Night in Canada in Cree is beginning with a match-up of the Winnipeg Jets against the Ottawa Senators on Jan. 15.

“I think mainstream media is a wonderful catalyst vehicle for us to have an opportunity to gain a collective Indigenous perspective about who we are,” said Earl Wood, who will host the broadcast.

Sportsnet will provide the graphics package and production of the broadcast, while APTN will handle commentary and analysis.

Wood, who is from Saddle Lake, Alta, will be joined by play-by-play broadcaster Clarence Iron and analysts John Chabot and Jason Chamakese on the call.

And while the first broadcast is nearly a month away, Wood, who is also a founding member of the Grammy-nominated Northern Cree Singers, isn’t wasting any time getting ready.

“I always try to practice. I practice all the time as an announcer. I just announce all day long wherever I am,” Wood said.

Five of the six broadcasts will be in the 7 p.m. ET/ 4 p.m. PT Saturday timeslot, with the March 26 Edmonton at Calgary match-up being the lone exception, with puck drop set for 10 p.m. ET/ 7 p.m. PT. The four remaining broadcasts are Edmonton at Montreal (Jan. 29), Vancouver at Toronto (March 5), Montreal at Toronto (April 9), and Toronto at Florida (April 23).

Wood said the experience working on the first round of the broadcasts was “epic.”

“It was a phenomenal moment regarding personal reclamation of self and the language and it instilled to me further importance of the language and foundational holistic awareness about self.” Wood said. “That moment brought me to a place of enlightenment. I felt like I was a raindrop in a storm of Indigenous coherency.”

Despite a lengthy career in the performing arts and hosting many live events, sports broadcasts were something new to Wood.

“I was really nervous, right? Who wouldn't be nervous? I was just thinking about all these people watching,” Wood added. “But when I came home, I saw the effect it had on our people that one of their own was a part of that.”

Wood said his own love of hockey started at an early age, playing pick-up games wherever he could find the chance.

“We’d play on sloughs. We’d play on rivers. We’d play everywhere.” Wood said. “When it would freeze, we’d play on the driveway. I remember when I was in residential school, we even played there at an outdoor arena.”

The Plains Cree broadcasts were postponed in the pandemic-shortened 2020-21 season, but there was a big push for their return.

They realized “this is just too important a project. We need to get some hockey games and crew back on the air,” said Mike Omelus, the executive director of content and strategy at APTN. “We're really excited about the prospect of National Hockey League games being broadcast in Plains Cree.”

Omelus says the team is taking it “day-by-day” as postponements have been common in the NHL of late due to rising COVID-19 cases counts on the teams.

“I think everyone recognizes that this is a significant milestone for APTN, but also the history of Canada,” Omelus added. “This is really making history in a big way. And it's especially important that we try and do even more to bring Indigenous and non-Indigenous people together.”

Like Wood, Omelus hopes the broadcasts can have a long-term positive effect on the viewer.

“It's about bringing these games to an Indigenous audience in a language that was prohibited from being spoken in the not too distant past,” Omelus added. “It's about sharing the beauty of a language with those who aren't familiar with it. It's about reclaiming and revitalizing Indigenous languages. Natural language is one of the strongest threads that connects people to their culture. And broadcasting these games allows us to honour those Indigenous ancestors who have passed down their languages.”